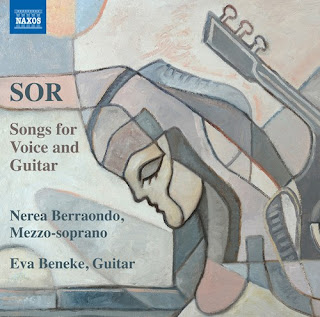 There is music waiting in the wings for you always, ready when you are. It is in printed form or manuscript (or if advanced jazz or other improvisational forms, existing  powerfully in potentia). Somebody right now may be performing it somewhere. Then there are recordings, setting down a frozen musical moment in time after careful rehearsal. The performances are captured for you, waiting to be heard, released and only needing to be placed on your player.

This morning I once again put on a good one, while I gathered my thoughts about what I heard. What is it? It is Fernando Sor (1778-1839) and his Songs for Voice and Guitar (Naxos 8.573686) as very nicely brought to our ears by mezzo-soprano Nerea Berraondo and classical guitarist Eva Beneke.

Sor in his day was a major virtuoso among guitarists. His songs have an earthy beauty that make them essential, yet they are not often performed now. So lucky for us the recording playing for me again this morning can be enjoyed whenever we like.

Music like this, or even all music like anything, needs performance magic to bring it alive. Something as delicately balanced as voice and guitar music demands special performance care. We get it in Nerea Berraondo's very musical voice, with a bit of heft when needed but never Wagnerian in its intensity, tender and rousing in turn, seemingly recorded without overly close miking so that she does not overpower Eva Beneke's wonderfully nuanced guitar work.

As to the music itself, there is much in the way of very melodically vibrant and ornate songwork here. "Italian Arias" include a few from Mozart's Don Giovanni. They have genuine but imaginatively altered authenticity as beautifully worked re-scorings. The "Spanish Songs," quite a good number of them, are strong and most characteristic--and irresistible. The "French Songs" add another dimensional strength and a couple of "Spanish Patriotic Songs" end the program with a captivating verve.

This is one of those delightful surprises where I had no set idea what to expect and then found with exposure that I had grabbed onto some of the finest music and performances that I didn't know I wanted until I heard it all! Like meeting someone who ends up being a good friend in a seemingly unlikely place, I treasure it all the more for the vistas it has opened up without my being quite prepared for it.

Anyone who loves Spanish classical and/or the guitar heritage will welcome this disc. It feels just right as a listening choice any time or season. Highly recommended.


Posted by Grego Applegate Edwards at 6:15 AM