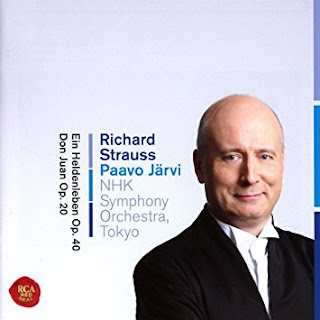 Richard Strauss (1864-1945) when I was young had reached the very top as far as "modern" ("late romantic") star composers of the day.  Bruckner was pretty obscure in comparison; Mahler was rising quickly and eventually surpassed Strauss in popularity, in terms of performances and recordings, but when "Also Sprach Zarathustra" was a main theme for the movie "2001, A Space Odyssey" Strauss was at his peak for household folks. If he is somewhat more in eclipse now, he still at his best is a consummate master, a phenomenal orchestrator and brilliantly imaginative inventor of complex programmatic form. If there is a handful of the best of the late romantic giganticists, he is surely up there at the very top.

The operas, the late songs, and the best of the tone poems are as worthwhile today as anything. My high school music teacher made me aware of "Ein Heldenleben" so long ago and I am grateful. "Don Juan" is up there with the very best as well. Now I've spent time listening to some of the classic versions of both by the likes of Furtwangler, Klemperer, Toscanini, and you might say I've been spoiled by the very best. The truth, though, is that the benchmark performances of the past do have a common sort of bombast that is exciting to hear, but the 2017 ears can be ready for other takes on what can be done.

Enter Paavo Jarvi and the NHK Symphony Orchestra in their recent recorded performances of "Ein Heldenleben" and "Don Juan" (RCA 88985391762). There is sterling sound, the full spectrum of orchestral breadth and girth, a passion and chutzpah these works demand, but also just a shade less of the overt bombast and a greater attention to detailed balance than the classic old versions.

And so perhaps this is how we now might best hear the two works, slightly less intoxicated with the sensuously over-the-top, a bit more Apollonian a stance, in other words. And I must say I am quite satisfied with that on this fine coupling.

If by chance you do not know these masterworks, the Jarvi may be the right place to start. If you are like me and have revelled in some of the classic recorded versions, this is refreshing, a less heart-on-the-sleeves approach that gives the ears something that may be a more contemporary take on it all. "Ein Heldenleben" is indispensable for any student of 20th century orchestral trends, but then "Don Juan" adds to it. So I recommend this one heartily.
Posted by Grego Applegate Edwards at 7:17 AM