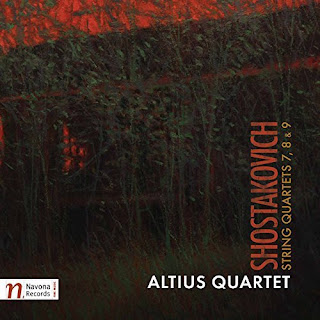 Shostakovich during his eventful life wrote 15 String Quartets. They have long been celebrated as some of the handful of 20th century masterpieces of the idiom for the emotional depth of the music, the exceptional color of the strings and the serious thematic dramatics of the music from first to last. It is music to live with and grow into for an entire lifetime. The serious breadth of the music gives us something to ponder and evolve towards for an eternity. How much can any body of music offer this in a sustained way? The less of it than the more, in the end. So we should treasure what we have so exceptionally in the Shostakovich Quartets.

And as if to forward that the Altius Quartet gives us a new recording of the middle String Quartets 7, 8 & 9 (Navona 6125). There is great thrust in their hearty brio, quiet passages of sensitive probing, affirmations of the complexities and trials of human existence.

The middle quartets are a bellwether in the unfolding excellence of Shostakovich's non-compromising, severe sublimity.The middle quartets are a product of post-WWII trauma and upheaval. It was not a good time to be a Soviet composer. Shostakovich reacted to the troubled times with a challenging set of works exactly the opposite of what was expected of him by State apparachiks.We are so fortunate that he courageously prevailed under such dire circumstances. Would any of our artists today been so courageous to produce works like this under all-too-serious government opposition? Maybe not. Perhaps today such an artist would simply be locked away in an ivory tower and disposed of with a passive-aggressive indifference? That is another situation and one might ask whether that kind of "freedom" is so much better? No answer from me. History will no doubt tell the story better than we can. Too much is at stake now. And we cannot always see what developments are moving us where.

In the end it is these works we remember as enormously significant beacons of  Modern 20th-Century Music.

The Altius Quartet gives us ravishing performances of the three quartets. There is brisk energy and unsentimental, slightly reticent acuity that make these performances stand out.

Are these the best ever renditions of 7. 8 & 9? I would not go so far as to say that. Nonetheless they are vital readings and I am glad to have the CD as an addition to my Shostakovich Quartet standard recordings. A newcomer to these essential works would be well-served too. Highly recommended. The Altius Quartet is a phenomenon!
Posted by Grego Applegate Edwards at 7:15 AM