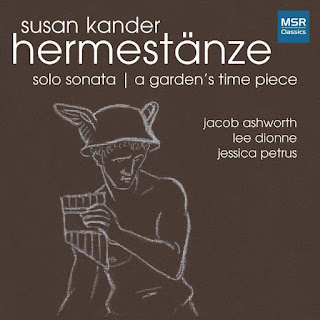 We carry on in life day in and day out. New people come into our center focus. Others leave. Unfamiliar composers can surprise us. Susan Kander is the latest of the latter. She is from the USA. Seemingly thriving. MSR sent me a CD of three World Premier Recordings of her music. Hermestanze (MSR 1578) is the title, named after the longest and perhaps most involved work of the three. A common thread throughout is the violin (and viola) work of Jacob Ashworth who sounds beautiful here. Joining him are pianist Lee Dionne and Jessica Petrus, soprano. All are dedicated to drawing out the rich subtleties of Kander's music, which is extremely well put-together and inspired, in a sort of Modern Neo-Classical vein.

There is depth and poise to the music. The half-hour opus "Hermestanze" (2013) for violin and piano forms the most remarkable of the three works, filled with intricate beauty. There is no direct similarity but one nonetheless recalls Stravinsky and Hindemith. There is a definite twist in form however that sets this work apart. In the tradition of earlier composers such as Schumann, the music is conceived of as a song cycle, in this case for violin and piano. 13 discrete yet interrelated song-like movements grace our ears, with a reprise of "Hermes, Messenger of the Gods" at the conclusion. This is no Neo-Romanticism in spite of the roots of the form. It is decidedly Modern and Classically balanced in the best ways. Jacob Ashworth commissioned the work and gives it definitive form. Lee Dionne makes an ideal partner for the performance. It is superb music, superbly played.

The "Solo Sonata" (2002) (with Ashworth on violin in the outer movements, viola in the middle) has the seriousness of purpose of similar works by Bartok, Reger and Hindemith. The imaginative and idiomatic use of violinistic articulations (such as double stops and harmonics) and a combination of momentum and moodiness mark Kander out as a worthy successor to the 20th century masters of such configurations.

"A Garden's Time Piece" (2011) is based on the poetry of Leslie Lasky. It has an introspective, contemplative air about it and a touchingly sparse demeanor thanks to Kanders well conceived parts. Ashworth's violin is the sole accompaniment to Jessica Petrus and her movingly sweet soprano voice. The nicely articulated performance and the considerable charm of the music win the day if you take the time to listen closely.

Susan Kander has genuine torque as a fully accomplished voice on the Modern scene. Get this one if a new wrinkle on Neo-Classicist New Music appeals. If you do not know whether that is so for you or not listen carefully and you may well be convinced that Kander is worth hearing and a welcome original exponent today.