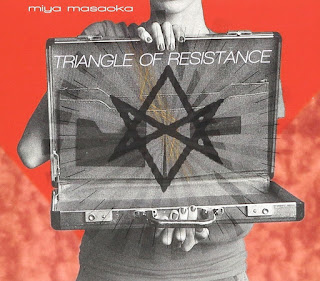 There is a great deal more New Music coming out of different shades of stylistic distinctness now than there might have been in, say, 1972. For composer Miya Masaoka, there is a High Modern stance that nestles welcomingly in a post serialist, post-pointillist, post-bleep-bloop manner of proceeding; that is on the two works contained on the recent album Triangle of Resistance (Innova 945).

The title work is the more ambitious and memorable of the two. It is scored for a chamber ensemble of seven instrumentalists including koto (played by the composer), plus string quartet, percussion and synthesizer. It was written in remembrance and protest against the internment of Japanese-Americans in the US during WWII. "The Long Road," "The Clattering of Life," and "Survival" are the respectve titles of the three movements. The music portrays the  uprootedness, suffering and upheaval of sudden and tragic displacement as it must have felt to the victims. The music has a muted anguish and an outspoken expressiveness to it consistent with the subject matter.

The second work, "Four Moons of Pluto" is written for solo contrabass. The music involves the shifting vortex of a number of heightened resonance positions via harmonic partials and enhancements gained by detuning strings. The work seeks an analogy between the movement of planetary bodies and the movement of small number ratioed intervals.

All in all we have two provocative and relatively stunning aural explorations that most New Music appreciators will likely find interesting and worthwhile. Listen.
Posted by Grego Applegate Edwards at 11:39 AM