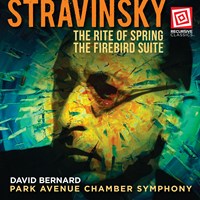 There may be no more important work in the rise of Modernism than The Rite of Spring. There perhaps is no more significant pre-Modern precursor than The  Firebird. Both established Stravinsky as one of the titans of our times. And music was never quite the same afterwords. Here 2018 now, more than a century later, and the music sounds as beautifully important as ever. David Bernard and the Park Avenue Chamber Symphony in the wake of their rather seminal recording of the Pathetique Symphony (see index for that review) come to us with another worthy offering, Stravinsky's The Rite of Spring and The Firebird Suite.(Recursive Classics 2058479).

As I sit here and write this post outside my windows are the makings of a soon-to-be-active springtime. Listening to The Rite of Spring again after so much personal and historical water under the bridge makes me wonder to myself. A work, this work brought reactions of horror and shock on the now infamous premiere performance. Audiences rioted. Hear the music today it is difficult to reimagine what the fuss was all about. That is of course much to do with how the music effected the Modern music that came after. Rhythmic drive, some dynamic dissonances, and Stravinsky's beautiful handling of the orchestra as no longer a matter of strings and extras, of course.

Does that truly explain the shock some felt on hearing the music for the first time? No. It is hard to reconstruct. By the time I was a kid Stravinsky was just there, part of what you heard. My very first classical record had on it The Firebird Suite. It seemed like it was made for a kid like me. In 6th grade we watched a slide show depicting the Firebird mytho-poetic sequence while the music played. No, they did not bring in the Rite at that point. And if they did not, it was because of the subject matter more than the musical content I would think. The Art Major Class in high school was it seemed always to be playing the Rite on the portable record player while kids created things. Nobody was shocked. Hardly.

So think of the subject matter.  "Ritual of Abduction," "Mystic Circle of the Young Girls," "Sacrificial Dance." This was a musical primitivism on the surface of things, just as Picasso introduced African Mask imagery into his art around the same time. People were reacting especially to this pre-Christian "savagery" when they rioted, maybe. Not to the music. Suppose Stravinsky had named it "The Hurricane?" That audience might all have cheered at the end.

Needless to say such a "primitive" subject matter hardly phases us today. It poses no threat. No more than Picasso's introduction of exotically "primitive" imagery into his paintings in the years just preceding the premier. It was in the wind there in Paris. It marked a momentus cultural change, of course. Yet it did not mean that Europe had truly "gone native." It was just an incorporation of non-Western, proto-archaic  aspects into the Modern assumption of what was acceptable as subject matter and content.

The music seems so familiar now that it could be profitably heard by virtually anyone of some musical understanding. Years and years of strident horror film soundtracks alone have accustomed us to expanded possibilities.

Now the Park Avenue Chamber Symphony and David Bernard's reading of Rite and Firebird reflects our acceptance and familiarity with these icons. There is sensuality, there is great power, there is a dynamic smoothness, a sure handedness of execution and easy comprehensions of the full breadth of the scores. The chamber sized orchestra does not overtax, the strings are equals with the winds and brass, all seems right and measured yet forcefully lyric.The percussion is not shy and we get the full weight of the music in a nicely balanced neither romanticized or self-consciously "savage" way.

The versions are close to ideal. The performance is near perfect for the newcomer to "Modern" music. Old hands may well find these versions worthwhile to add to their collection. I myself am glad to have them.