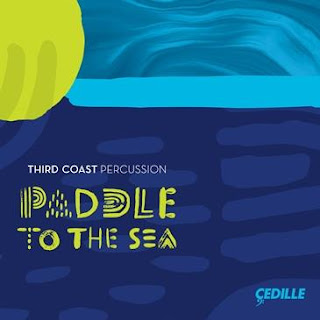 We approach a season, especially where I am, that becomes ever more focused on water, particularly sea water. Enter the Third Coast Percussion's Paddle to the Sea (Cedille CDR 90000 175). As the title suggests, the music performed on this program has been put together in this form to describe  musically-virtually a journey out to sea on a small craft. The music follows on the heels of their Grammy Winning album of the music of Steve Reich.

The music is perfectly dazzling much of the time, like early light upon the waves of the sea. Lots of marimbas, vibes, metallophones, and some mbiras evoke a post-African, post-Indonesian Modernist and post-Modernist sprawl of time and tone. Head to the sand, to the waves, to the smell of coconut oil sun lotion, to the teaming marine life that boat skims over gracefully on a spring morning. That is the music to me on the eve of the end of winter.

Third Coast Percussion here triumphs where perhaps others would do so the lesser. There is a musical opening onto the water from the first, Third Coast's striking arrangement of Philip Glass's "Madeira River." It sets the scene for the "Paddle to the Sea" sequence that cycles like a space-age Javanese Gamelan. It was originally created to act as the score for the film of the same name. It has depth and dramatic breadth too.

Then there is m-bouyant mbira via Musekiwa Chingodza's vocal-mbira arrangement of the traditional Shona African "Chigwaya." It is ravishing music. From there we hear arrangements of three more movements from Philip Glass's Aguas da Amazonia and six movements of Jacob Druckman's Reflections on the Nature of Water.

I've listened to this album a bunch of times by now. My love of it grows without fail each time I hear it. Anyone who appreciates melodic percussion and the Post-Minimal possibilities that can be heard today must simply look this one up! Anyone looking for "trends" of New Music lately will find this most absorbing as well. It is sublime!