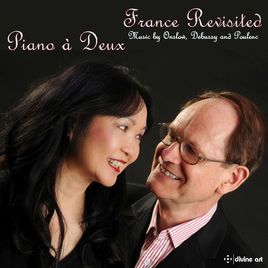 What makes French music "French"? Is there something in common between the music of Rameau, say, and that of Messiaen? It is almost a ridiculous question since there is so much music that has been created by French composers over the years that it is too much to expect it all to conform to some hypothetical model. Yet one thing one might make note of is the the lyricism of much of the music--a lyricism that is never quite Romantic in some Germanic way, even with someone like Berlioz? Yes, I generally think that.

This morning for my blog discussion I have a program of French works by the Piano a Deux group, namely Robert and Linda Ang Stoodley, entitled France Revisited (Divine Art 25132). The works featured are not especially standard fare, all being music for four hands at one piano with the exception of one piece, which is for two-handed piano solo.

The inclusion of two works by George Onslow (1784-1853) is as unexpected as it is rewarding. He wrote an extraordinary amount of chamber music including 36 String Quartets and 34 String Quintets! The "Sonata for Piano Four-hands, No. 1 in E Minor, Op. 7" is masterful and strong, and the "Six Pieces Pour Piano (solo)" is a charming set of miniatures that compels and beguiles.  These are revelatory, showing us a mature Onslow that has a sprawling lyricism, almost Schubertian in scope.

Piano a Deux have a remarkable fluidity and togetherness which make them a delight to hear. The Onslow works are a real find; the Poulenc and Debussy as well played as any versions I have heard. All told France Revisited  gives us a unexpected joy as we hear! Recommended.