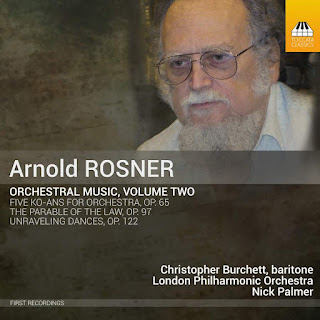 One thing is for sure, in the New Music world nothing is sure as we  live through the present. In 100 years we may see a very different picture. Right now, there are so many excellent voices either underrepresented or heretofore unknown, or just getting recognition, or whose status is uncertain. Where will they all fit? How many Bachs will emerge from underneath our Telemannic evening of the musical soil-soul? Any? Many? In the end for us it is not about certifying the new Bach(s) so much as it is a matter of making sure we have heard all the voices. Without a hearing, how can the music speak to us?

With that in mind I always try to audition New Music by composers I have missed one way or another, so that perhaps the process of sifting through leads us to happy discoveries and surprises. On that very note I said "sure" to the opportunity to hear Arnold Rosner (1945-2013), specifically his Orchestral Music, Volume Two (Toccata Classics 0465).

And as I emerge from the intensive listening of said album I must say I am beguiled, impressed with Rosner's true vision and orchestrational grasp.

"The Parable of the Law, Op. 97" (1993) gives us a mysterioso setting of the Kafka text and Chrisopher Burchette's well burnished baritone for a mood that reminds slightly of Vaughan Williams and his ever-evocative evocations. This not in some obvious way. Rather it sounds well and Rosneresque in its own way. It is an orchestral maze of tone and text, of a searching for meaning and understanding, a question not unanswered so much as as endlessly answered with the more of it ever.

Listing to this volume a good number of times, I emerge with a clear sense of the Rosner musical personality, not so much a cross-section of a number of modern developments and the past, instead a conscious refashioning from what has been and a fertile inventive imagination. Nick Palmer and the London Philharmonic give us impressive and heartfelt readings of the works. Very recommended.
Posted by Grego Applegate Edwards at 6:56 AM