John A. Carollo, The Transfiguration of Giovanni Baudino 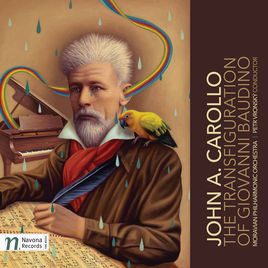 In the realm of emergent composers in the US, one of my favorites, happily, is John A. Carollo. There is a brand new one coming out soon and I will no doubt cover it. Today, though, I must catch up with a very nice one that came out last year. The Transfiguration of Giovanni Baudino (Navona 6109 CD or 2-LPs) I've been listening to and liking for several months now. It is a compilation of orchestral works in World Premier Recordings. Per Vronsky conducts the Moravian Philharmonic Orchestra throughout. The performances are respectable and give us a clearly articulated opening onto the works. There no doubt will be other performances to follow in time. For now we get to hear the music as Maestro Carollo intended it.

There is a great deal of excellent music to savor in this program. "The Rhetoric and Mythos of Belief" and "Move Towards the Light (Your Destiny Awaits You)" are the first and last compositions in the sequence, bookends that have some of the very ravishing Carollo largos, which are so American in thrust, with some echo and extension of the Ives mystery and perhaps even some echoes of Ornette Coleman's justly celebrated "The Skies of America." That is not to say that there is imitation involved, just a kind of Zeitgeist of belonging. These works perhaps epitomize a kind of cosmos of longing for something beyond the materiality of the American Dream.

More or less sandwiched in between are a number of rather wonderfully contrasting works of a very different sort."The Transformation of Giovanni Baudino," "Let Freedom Ring," "Do You Have an E.R. for Music?" and "Symphony No. 2 (The Circle of Fire)" give notice (again?) that John A. Carollo is a serious player in the New American Music scene today. The works have great forward rhythmic momentum without following a "Rites" model or for that matter any other in any obvious way. The music is consequential and enlivening, It exists in its own singular category as Carollo music. That is saying a great deal.

A detailed description of the music is not really necessary for these purposes. Suffice to say that there is a dynamic energy to the middle works and a ravishing mystery to the end works. Together we get a detailed earful of the full spectrum of Carollean musico-logic and poeticism.

I recommend this music to you most strongly. It is original and grows exponentially inside you the more you listen. Grab this if you want to open yourself to emergent American music today.