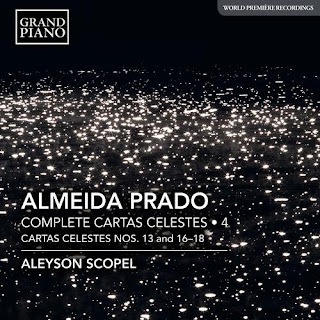 Once again I am happy to check in with you on another composer of true merit.  Before this CD series came my way recently I knew virtually nothing about the Brazilian Almeida Prado, or to give his complete name Jose Antonio Rezende de Almeida Prado (1943-2010). His sprawling series of works for the piano, the Cartas Celestes were some  18 in all, 15 for solo piano. They address the stars in the heavens, literally, and who would find that uninteresting in itself?

Aleyson Scopel has embarked on a complete recording of the piano works. I covered the first volume a while ago and I loved it. See my write up by typing Prado in the index search box at the top left of the page. And we look at today what seems to be the final volume, No. 4 (Grand Piano 747), which covers Nos. 13 and 16-18. Prado studied with Nadia Boulanger and Messiaen and their formative influences are in his music. The heavenly ambiance of Messiaen's beautiful piano style  has some bearing on what we hear in these works, along with something familial in George Crumb's "Microcosmos" piano works as well. Yet for all that the cosmic spaciousness and mystery of these final works in the series have a definitive originality about them.

Aleyson Scopel reads these works with care and poeticism. The deepness of Prado in a Modern lyrical way can be well-gauged in this volume. Boulez might not have approved of his unification of tonality and edge tonalility but Boulez disliked Messiaen for that also. We do not have to espouse some all-or-nothing view. It is not a thing of our times after all to be multifold! And Prado is brilliant at it.  He does not fail to engage and delight, to cause you to ponder and drift into the universe around us. Bravo! Prado is a discovery if you do not know him. Very recommended.
Posted by Grego Applegate Edwards at 8:09 AM