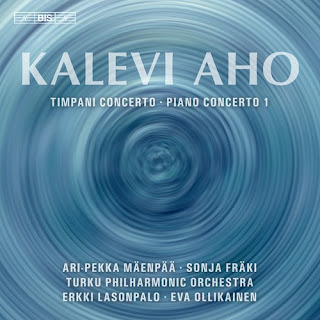 In the course of doing this Modern Music blog site since 2011 I have been fortunate to come upon the music of Kalevi Aho (b. 1949), the Finnish composer whose music we again encounter happily today (type his name in the index search box above for earlier reviews of his music). The CD at hand covers two notable concerted works, the recent "Concerto for Timpani and Orchestra" (2015) and the 1988-89 "Concerto No. 1 for Piano and Orchestra" (BIS-2306). Both are performed with precision and enthusiasm by the Turku Philharmonic Orchestra under Erkki Lasonpalo (Timpani Concerto) or Eva Ollikainen (Piano Concerto). The solo parts are most capably handled by Ari-Pekka Maenpaa (Timpani) and Sonia Fraki (Piano).

What a repeated series of listens have revealed to me are two concertos (he has written 28 in all thus far) of real weight and striking expression. Whether or not anyone would agree with me I hear Aho as a kind of original Modern successor to the later works of Carl Nielsen. Both have a certain "characteristic" manner of proceeding chromatically in ways that bring out a thorough orchestrational command and a clearly forwarded thematic presence. Aho understandably is the more Modern in his harmonic edginess and lesser tendency to resolve the whole in some absolute sense.

There are few works in the repertoire for solo timpani either accompanied or unaccompanied. Elliot Carter's  "Eight Pieces for Four Timpani" is an exception. I rack my brain without coming up with another., which doesn't mean there are no others, just that my minds blanks at the prospect. Aho's concerto gives us a very stimulating and rather demanding solo part with intricate melodic contours and idiomatic articulation. The timpani carries the concerto without being a continually dominant voice. The orchestra has a great deal to say and says it well. There are times when the snare drum intertwines with the timpani part and it all sounds right. If you expect later on to whistle the timpani melody while you go through your daily rounds, think again. This is quite complex Modern music after all. If any new timpani piece might be expected to enter the repertoire this could well be it. Aho carries the day handily and in a most lively way.

"The Piano Concerto No. 1" stands out as a boldly brash piece with a lithe mercurial piano part and memorable piano-orchestral exchanges of great excitement and contentful thematics. If the handling of themes seems slightly more hard-edged than is the case in the Timpani Concerto, one must assume that the inspiration of having every bit of the piano before the composer as the prime solo mover would have given him less fetters and allowed his imagination to soar more freely. It ends the two-part program in a most rousing way and if the motillic ghost of Prokofiev sometimes looms in the background it is stylistically natural and not in the least bit derivative.

So there we are with this one. The SACD/CD compatible recording sounds bright and well staged and the music is of the highest caliber. This will appeal to all Aho aficionados and would be fair and attractive game for any follower of the Modern with a capital /m/.
Posted by Grego Applegate Edwards at 7:27 AM