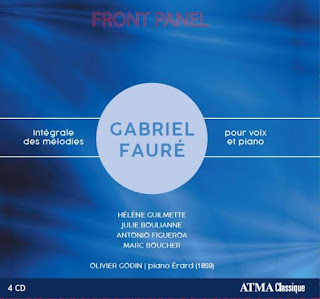 Music enthusiasts who favor certain artists and/or composers tend to respond well to a "complete" anything by those people. If you know you like the music of that person, it stands to reason that you would wish to hear everything that person might have created or performed in a particular category or genre. So I felt this way when I found I had the chance to hear and review the new Integrale des Melodies pour Voix et Piano by Gabriel Faure (1845-1924) (Atma Classique ACD2 2741 4-CDs). The first thing that hit me on opening up the set was the extremely attractive graphics and very practical setup with all four CDs and the booklet bound in gatefold style--in other words as a single, integral "hard covered" CD  book.

The artists and their readings are of course central to the success of such a project. A core aspect of that is the continual presence of Olivier Godin playing a gloriously sweet 1859 Erard instrument.
The vocalists, separately and on rare occasions in various combinations, are graced with beautiful voices that are not too operatic and seemingly perfectly suited to the song form as Faure practiced it. They are Helene Guilmette, Julie Boulianne, Antonio Figueroa, Marc Boucher. Each is a true artist and a wonderful Faure interpreter.

A confession before I get deeper into my experience of this music. When I started seriously listening to Classical and Modern Classical music I tended in part to get ever deeply into composers I was exposed to partly out of chance and partly from reading up on the history and development of the music. So for various reasons in the realm of French music I gravitated toward Franck, Debussy, Ravel, Satie, Milhaud, Honegger, Poulenc and Messiaen, etc. I at first missed Faure partly because it was easy without coaching not to understand completely  the continuity and change of the progressive unfolding of important French composers in the Late Romantic period, and partly because I came slightly later to vocal music--especially in the case of Faure, the songs and choral music that made him so important. So in time I came to listen to these things and came to love it, along with the solo piano music as well.

So in terms of my listening to the Faure song output, I listened closely to a select group of the songs sung by singers I respected very much, but in my hearing of the wealth of them I was missing a good many of them. So in the Godin and company complete song set I have happily the chance to hear the all of them. After repeated listens I am very glad to find that there is a consistent brilliance of compositional presence, a lyrical yet very focused intensity to them all Faure was a voice that sat between the heavily impassioned Late Romantic Berlioz and the dazzlingly dappled transparency of Debussy and Ravel. Faure in hi songs have a good deal of feeling yet always a kind of light touch, more translucent and so very much more French than some of the other great song masters of his times.

The 108 songs-melodies are a formidable gathering by any standard. The jacket notes inform us that this set is the first to respect Faure's specifications completely as to voice type for each song and the original key indications. The Erard is tuned to 435 Hz, which was decreed by the French Ministry as the standard in 1859. So in so many ways these are the works faithfully rendered as Faure intended them to be be heard. We begin with Op. 1, No. 1 and go from there to those last songs on the Op. 100s. Is there increased clarity, increased introspection as we go from early to late? I hear it something like that, though I have neither sat down and done some statistical aural correlations.Even then some of my perceptions are perforce subjective. I embrace that the music as all music sounds a certain way to me and for me as you must also have your own take. Intersubjectivity may confirm my impressions or it may not. No matter. I am neither qualified to write a PhD dissertation on such a thing nor at this point would I want to!

The point in all this is simple. The music is essential, all of it if you have the time to devote to it and want to expand your appreciation and understanding of the French Art Song in a period central to the development of Modernism. The performances are moving and poetic. The music impeccable, expressive, even ravishing in its beauty and expressive determination.

So if you have the inclination to get this, I believe you will be happy to delve into the wealth of fine music! Get this, then!


Posted by Grego Applegate Edwards at 7:13 AM