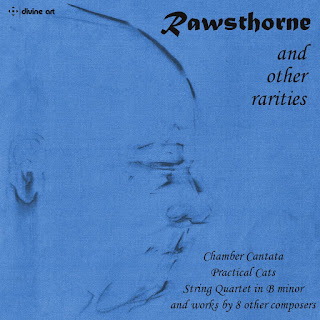 Since it is the July 4th holiday here in the States, I come on to the blog somewhat briefly before I attempt to burn meat on a gas-fired device. I would be remiss though if I did not spend some time this morning writing about an unusual and gratifying release. I speak of the recent CD Rawthorne and Other Rarities (Divine Art 25169).

It is a most illuminating look at the music of the rather obscure 20th century English composer Alan Rawsthorne (1905-1971), plus eight more rare and rather whimsical compositions that fit in with the Rawsthorne, and all but one short work is here enjoyed in World Premier Recordings.

For the Alan part of the disk we hear his "Chamber Cantata," "Practical Cats" (as arranged and edited by Peter DIckinson), and finally his "String Quartet in B minor." These are idiosyncratic works with some nod to things like Schoenberg's "Pierrot" and Walton's "Facade," but not slavishly or even exactly obviously. More like something that was "in the air" in those days. Rawsthorne is quirkily Modern and very English, so quite charming and for the enjoyment of any and all Anglophiles in the musical world today.

Then the fascinating yet very obscure works we hear in addition have delight going on for us if we open up. That is in the main. Not all are quite masterpieces, but what do you expect? Odd and rarely heard works by Vaughan Williams, David Ellis, Malcolm Lipkin, Arthur Bliss, Donald Waxman, Karel Janovicky, Basil Deane, Raymond Warren and Halsey Stevens, names which may be somewhat or very familiar, others rather unfamiliar.

The whole hangs together in a quixotically stubborn way and one if like me smiles and nods. Here is something so well off the beaten path one might find oneself hacking through to make a clearing, but happily so! I recommend this if you want something Early-Modern-worthy and completely quirky. Performances I should mention are very first-rate!
Posted by Grego Applegate Edwards at 7:20 AM