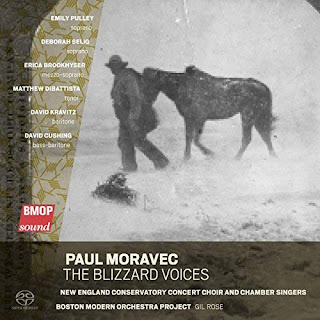 In ideal circumstances what the Boston Modern Orchestra Project under Gil Rose is doing will redefine the US Modernist world by highlighting deserving works and composers from this century and last. I say ideally because I no longer know with the world in a certain chaos whether cultural institutions may always have the impact they would in earlier times. That includes the impact of music writers like me and then of course the general concert scene and the world of audio releases of works. I have been covering many of the BMOP CD releases and today I speak of another. It has been out for a little while and I have been meaning to cover it for a while. So today I do.

The release at hand is a recording of  The Blizzard Voices (BMOP Sound 1054), a rather monumental choral-orchestral oratorio from 2008 based on the poetry of Ted Kooser. The work was written by living composer Paul Moravec (b. 1957) The poems were adapted into a libretto by Mark Campbell. The theme is that of the Western Plains of the US and a blizzard that a group of would-be settlers experienced and in the end did or did not finally endure. The blizzard took place in historical terms in Nebraska in January, 1888.

The work is scored for in addition to orchestra six vocal soloists and an SATB chorus, the latter in the form of the New England Conservatory Concert Choir and Chamber Singers directed by Erica J. Washburn.

The soloists and body of performer do full justice to this rather involved work. As to the music itself? It has a monumental, heroic passion, and a roughly-hewn-of-granite strikingly bold quality. There is a subtle sort of Americana at play that alludes to the humble musical life of the Plains, of hymn tunes and songs sung in everyday settings that do not point to Grand Art so much as music on the ground floor of existence, the sort of music most people experience in a pre-industrial setting, not product, not "pop" in that there are no surveys taken, just music that exists among people because music is like that. The strain of folkishness is not obvious like perhaps some of Copland might be. It emerges subtly from time-to-time but the panorama of bleak and in the end lethal winter predominates with a harsh sobriety and heroic despair born of the place and time of the story. It is an aesthetically derived hardness that does not point back to the composer any more than Mark Twain "was" Huckleberry Finn.

In other words this is genuinely gifted aural story-telling. I sometimes remember Vaughan Williams in his best narrative mood mode, or yes, Copland in that vein, and some of the other later Operatic-Oratorio master that it would be pointless and even misleading to name because it would imply there is some imitation happening here which there is decidedly not.

It is masterful composing from someone I surely want to hear more of. The music seems destined for larger audiences. It is accessible and more comprehensible for its tethering to dramatic content than some purely abstract Modern tone poem. It is Modern in its thickly edgy harmonic fullness and post-Romantic unsentimental expressive feeling-fullness. The vocal parts stand out for the natural rightness. The orchestral parts work fully well as a fleshing out of the drama and an aesthetic canvas apart from the plot and its content.

If I wind-up my description of the music to that for the present, it is not that there is nothing more to be said. I leave that to others. Many listens after the first one of The Blizzard Voices and I come away convinced that this is a work of importance, wonderfully rendered. Varese remarked long ago that "the present-day composer refuses to die!" It remains true. We owe something to that present-day by supporting our creators. So buy this.
Posted by Grego Applegate Edwards at 8:06 AM