Victor Herbiet, The Road to the Ethereal Gate 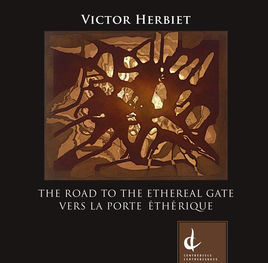 If one is an avid New Music explorer one does best I think when one approaches a new artist or composer with no preconceived ideas or expectations. By virtue of the newness of music we are given the chance to hear what "serious" music there is in our world and how it all is ever new. Not knowing Victor Herbiet and his music then, I put today's offering on the first time a few weeks ago and I was treated to a series of unexpected stylistic turns, all in the end leading one to a happy place of listening. I refer to the album on tap, The Road to the Ethereal Gate (Centredisques 25118).

This album showcases Herbiet as composer of music that features to my ears mostly alto and soprano saxophones. If he also plays tenor I somehow heard it as an alto. That says something about the brightness of his tone. Victor is a fine player and appears throughout as the solo saxist or the sax in the well-mapped chamber blends. His playing and writing for sax acknowledge the Jazz heritage but also the Classical sax inheritance. Think "Pictures at an Exhibition" and the like for the Classical sax style.

The music ranges widely yet with a personal stylistic fingerprint. "Tango a Trois" for example looks at the Argentinian tango and takes a trio of alto, violin and piano to a place that echoes the grand past of the dance music while saying something personal. "Twelve Tone Rag" does something similar with Ragtime.

From there we brush against further sax intersections with chamber configurations and solo flights. The second half of the program features a good deal of music for solo sax, technically demanding, lyrical, jazz inflected but in a Modern Classical framework for the most part. "The Four Elements," "Through the Ethereal Gate" and "On the Shores of Eternity," the later two with a set up where a theremin responds in an programmed way to the sax phrasings. . .  these three works define nicely for us a singular vision of the virtuoso possibilities of sax that have lyrical and expressive clout.

After a good number of listens I am happy with this music, quite so. It does not seek a cutting edge view of what one can explore, yet in no way does it advocate for some status quo mainstream. One might say the music on the whole is quirky? There is a nicely stubborn individualism at work in that you feel that Herbiet does the music he does out of an inner conviction that each foray is right and for itself. So then in no way is this the music of a follower; more so a leader and sax advocate. I certainly appreciate the music. If you are open to a new-with-roots, yet a refusal to follow the beaten path, and especially if you love the saxophone, this one may well be for you. Bravo!
Posted by Grego Applegate Edwards at 8:18 AM

Email ThisBlogThis!Share to TwitterShare to FacebookShare to Pinterest
Labels: modern music and the saxophone today, the modern in seriously rooted and in a post-before, victor herbiet the road to the ethereal gate gapplegate classical-modern review