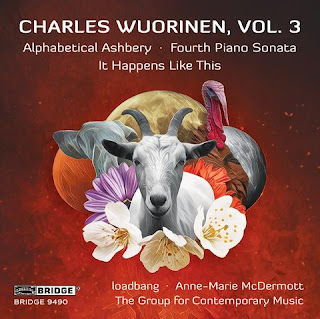 Ever since high school when I stumbled upon some excellent Charles Wuorinen records that had just come out, Maestro Wuorinen has been one of the most important of the American Moderns to me. I made sure to get a review copy of his music on Charles Wuorinen, Vol. 3 (Bridge 9490). And then, I did not notice that a number of review CDs had fallen off my pile into a no-man's land that I only now rediscovered. So if I am late reviewing this gem it is no reflection on the quality of the music.

Charles is a central figure in the High Modernist camp. A major force on the New York Music scene when I was younger, he remains one of the very best things to come out of Columbia's famed music department in the '60s. The recent music of Vol. 3 (2007, 2010, 2013) gives any dedicated New Music follower a wonderful set of compositions for study and enjoyment, excellently performed by the Group for Contemporary Music under the composer.

The first thing that hit me hearing this program is how well wrought is Wuorinen's music and the newer compositions are not at all lacking in this architectonic sublimity. Listen to the "Fourth Piano Sonata," a fiendishly difficult yet elation-bringing 20 minutes of otherworldly density and drive! There is so much going on in this work that you must hear it a number of times before the wind fully catches your sail. Anne-Marie McDermott acts in a Promethean-heroic way to realize the complex music with ultimate comprehensibility and rangy excitement. Who says High Modernism is abstruse? Not me. In truth I think I might well put this on for any musical person and they I think would take notice. It is not just for the rare few.

"It Happens Like This" has an extraordinary presence in its 40 minutes for a group of four vocalists and chamber orchestra. It perhaps is as Post-Serial as it is Late Serial in the exploding forward of expression. But then Wuorinen has never been a formalist or a formulaic voice. Some of his writing here for all four voices and chamber instrumentalists passes the usual expressionist heights to something unexpected and quite stirring! There is operatic dialog and a very rewarding interplay of voices and instrumentalists. It is a major theatrical-vocal work of our time I would assert.

And the opener is not as all-encompassing for length yet very much Wuorinen at his best. Vocalist and chamber players achieve a simultaneous horizontal flow that truly soars.

So are we hearing or will you hear just another High Modernist blip-bloop set of abstractions? Well I resent the question! Seriously the answer is. no it isn't and also, in contradiction, yes the very best of bleep-bloops! It is about time in my opinion that anti-Modernists out there (perhaps most now dead) get with the program and embrace what enquiring musical minds have been enjoying now for almost 100 years. Modernism has not failed, the Anti-Modernist voices are instead rendered obsolete. Perhaps the paradox of the Avant Garde in general as we look back is that the music was not ahead of its time so much as the audiences, most listeners at some point, were impossibly behind the times. We who have spent our lives in a mostly urban modern chaos respond to such masters as Wuorinen with some relief. What I mean to say is that for us such composers create sense and a higher order...sense and order and truly transcendent expression out of the muck of what seems at times a senseless chaos of life.

So all you who have need to understand where we are and how it relates to where we have been, Charles Wuorinen is a composer I might suggest you listen closely to on this album. Listen a few times, maybe more than a few times. Charles Wuorinen has been with us forever, it feels like. Yet no, he is in historical time, the same as what we live in now. And he still is here, happily for us. So listen to what he has given us recently! You will be glad of it, I do think.
Posted by Grego Applegate Edwards at 7:16 AM