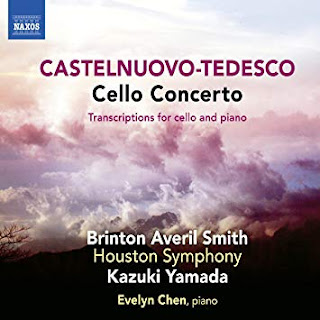 Generally speaking since Mario Castelnuovo-Tedesco's death in 1968 his worldwide reputation has somewhat ebbed. In the last decades on the other hand there is some indication that there is a slow but steady momentum gathering strength bit-by-bit, some signs that his music is once gain finding favor in concert halls and via recordings. After 80 years between professional performances, the 1935 Cello Concerto awakens us to reconsider his music again in the current World Premiere Recording by cellist Brinton Averil Smith and the Houston Symphony under Kazuki Yamada (Naxos 8.573820). We are surely not done with the composer yet!

Castelnuovo-Tedesco, as the liner notes to this CD remind us, found his Italian homeland increasingly dangerous as Mussolini and the Fascists came into power and banned his music than due to his Jewish heritage. So he came to the United States and lived the second half of his life there. And like all war refugee composers he found that the USA allowed them to live on and continue to compose, but not always to build a reputation that Europe made possible before fascism. Things could go either way, as you might gather by comparing the fate of Stravinsky and Hindemith vs. Korngold and Bartok.

Circumstances help explain how the "Cello Concerto in F major, Op. 72" has been forgotten completely, Written for the famed cellist Piatigorsky and premiered by him under Toscanini such auspicious beginnings did not translate into long term recognition. Some 80 years later we now stand before the nicely performed and well recorded evidence that the "Cello Concerto" is in no way deserving of such neglect. It is a work of boldness, heroic virtuosity, thematic wealth and dramatic arc. Cellist Smith, conductor Yamada and the Houston Symphony give us ample means to appreciate this music. . . though it may not be at the very cutting edge of the Modernism of the times. It may in fact be Impressionist and Late Romanticist more so than not, yet not unoriginally so. It is powerful and engaging fare, well worth the price of admission for its 30-minute three-movement presence.

Filling out the release are a number of cello-piano transcriptions. Most of the music will be quite familiar to most all readers, yet in this configuration it is all made anew. So we get Castelnuovo-Tedesco's reworking of Mozart's Serenade from Don Giovanni, two arias from Cherubino's Le Nozzi di Figaro (as arranged by Smith for his recording), the fourth and fifth movements from Ravel's "Miroirs," and a version of Rossini's "Figaro" from The Barber of Seville.  And finally the program ends with Heifetz's arrangement of the first part of Castelnuovo-Tedesco's  "Sea Murmurs."

The second half of the program is not going to set your brain on fire exactly, yet it is a thoroughly enjoyable and well-played segment. The main attraction is definitely the "Cello Concerto" and it will be a boon to any Castelnuovo-Tedesco fan! Recommended.
Posted by Grego Applegate Edwards at 7:31 AM