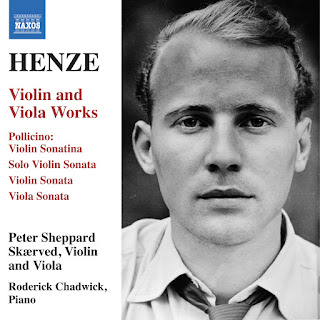 Hans Werner Henze (1926-2012)--he is an artist-composer whose full breadth must be gauged if we are to appreciate fully.. I will admit that in my case I am still in the process of exploring his output, as no doubt more than of a few of my readers are as well. Naxos has been instrumental in this wise and a new volume continues the exposure as they fight the good fight to cover a broad spectrum of New Music. I refer to the release at hand, namely Henze's Violin and Viola Works (Naxos 8.573886) as performed nicely by Peter Sheppard Skaerved on violin and viola and Roderick Chadwick at the piano.

The works cover a long stretch of time, from the youthful 1946 "Violin Sonata" to the Millennial-eve 1999 "Peter Doll zum Abschied" for solo violin. We are treated to four major works and a couple of miniatures.

Perhaps the most interesting of the four is the "Violin Sonata" of 1946, mostly because it is unexpected if you do not know his early period well. Henze was subjected to the angst and poverty of the German post-WWII period yet was in the middle of study under the tutelage of Wolfgang Fortner at the time he wrote the sonata. The work has an expressive Modern feel that is decidedly pre-Serialist  and so shows a bit more direct a melodic clout.  It is memorable for that. The liners point to this work as a sort of prelude to the "Violin Concerto" that was to follow shortly thereafter. However it stands well on its own in any event.

On the other hand the "Pollicino: Violin Sonatina" of 1979 manages to be extraordinarily expressive and haunting while being more contemporaneous to the Serial world of High Modernism still then in full flush at the time.

The somewhat more radically abstract "Solo, Violin Sonata" of two years prior is a gem of constructive architecture, rangy and harmonically expanded-ambiguous as one might expect of his central style of the era, yet too most definitely a product of an actively brilliant musical mind. It is theatrical piece where there is a  homage paid to the humanist Italian Renaissance poet Poliziano and "death is admitted into the cheerful world of the pastoral" in the composer's words.

The final "Viola Sonata" (1979) brings out the burnished woodiness of the viola in a landscape where the piano makes an equal set of statements for a kind of constant unfolding, a noting of consistent insistence and significance.

The total impression is wall-to-wall worthiness, High Modernism of the highest caliber played with total conviction and passion by Skaerved and Chadwick. This is a very enlightening release for Henze appreciators and something to explore without fear for those who wish to broaden their appreciation. Keep in mind you will need to hear this a number of times if you expect to get a full understanding of what is happening. It is worth the trouble, surely. Henze was in his own way brilliant. He shows us how here.