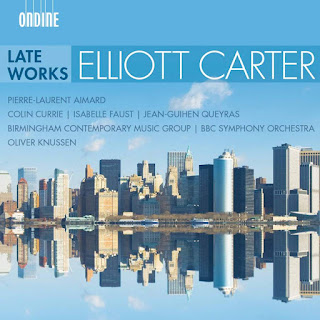 During his long life span (1908-2012)  US composer Elliot Carter established himself as a major voice in New Music, one of the brightest lights of the later 20th century. Once he found his own very original niche he refined and honed his music to thrilling levels of complexity and High Modern expression. The String Quartets are as fine as anyone's from the Modern period but then there is an additional wealth of music in chamber and orchestral realms that we need to absorb and appreciate.

Today it is time to consider a program of some of his final works, written between 2003 and the year of his death, 2012. There are a good number of recorded premiers to be had on this CD and in any event all the works are well performed by the Birmingham Contemporary Music Group and the BBC Symphony under Oliver Knussen, plus Pierre-Laurent Almard on piano, Colin Currie on percussion, Isabelle Faust on violin and Jean-Guihen Queyras on cello.

The album is aptly titled Late Works (Ondine 1296-2). On a Monday morning this seems a fitting description and alerts us as to what we will hear. The final decade shows Carter much in the same vein he had been in for some time, a kind of post-Darmstadt expanded atonality, a remarkably worked over musical geometry of great detail and exploratory zeal, a music very aware of each instrument's idiomatic qualities and a vision of how they can be amassed and apportioned. The complex rhythms had been developed to an advanced point where the absolute precision required of each player results in a timeless quality that bubbles and boils forward to an ultra-architectonic uber-chaos of exactitude? Something like that. It is sublime music indeed. Like fractals the great complexity of the whole may at first blush seem chaotic, yet underneath there is form subtly co-existing with an exploded. expanded music world. Perhaps it is interesting to contrast this kind of complexity with the Cagean one--there the composer allows chaos to enter his front door, so to speak, yet in the end we hear order and structure after all if we listen closely, repeatedly, intelligently.

It is a great deal of unfamiliar music and it does require close listens and perhaps several hearings for a full appreciation. That said however, there is no mistaking this music for something merely, generically "avant" so to speak. It is the profound set of final musical utterances by a master after more than 85 years of composing!

Anyone wishing to be exposed to High Modern masterpieces from the very decade we are currently within (give or take) should not hesitate about this one. Carter was undoubtedly among the greatest of the last really brilliant Serial/Post-Serial composers of our time. I suspect his music will be heard and loved by music appreciators for many centuries hence.
Posted by Grego Applegate Edwards at 8:42 AM