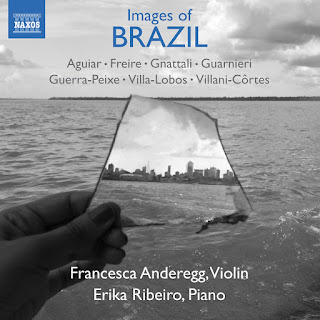 The music of Brazil is a vast possibility of riches that we outside of its borders have often not nearly enough familiarity with. The Naxos label has given us a good selection of Villa-Lobos works nicely sequenced and performed, and will be embarking on a 100-work exploration of other Brazilian composers, the first volume of which I expect in the mail shortly.

In the meanwhile we have this fascinating anthology of Brazilian music for violin and piano, played with flair and charm by violinist Francesca Anderegg and pianist Erika Ribeiro. It is as you can tell by the above an album called Images of Brazil (Naxos 8.573923). On it we are treated to seven works by seven composer, some perhaps not very familiar to most of us, the music all between 4 and 17 minutes in length.

When generalization cannot quite get specific enough on a Monday morning we still need to encapsulate, so let me say that all these works share in the melodic-harmonic light of the Brazilian legacy, which is to say that there is Modern tang and Neo-Romantic expression, what one might call "Brazilian Impressionism" and a lyricism that has something of the saudade of Brazilian musical sense to much of it if you know how that feels. And that as a whole is what makes Brazilian and Portuguese music Romantic in different ways than European Romanticism, at least part of the time. In all of this there is something of that in there to be found, surely.

So a not-so-familiar Villa-Lobos ("The Martyrdom of Insects") has a good feel to it, and some of us will recognize Mozart Camargo Guarnieri (1907-1993), at least by name. His "Violin Sonata No.4" is seriously played with a passion that it justly evokes and lots of content thematically.

From there we experience a huge helping of the unfamiliar but in the end the absorbing and timely. We have Cesar Guerra-Peixe, Les Freire, Ernani Aguliar, Edmundo Villant-Cortes and Radames Guattali. Of all of these three are among the living (Aguiar, Freire and Villant-Cortes). The rest have in common that they left this earth somewhere between 1988 and 1993--except Villa-Lobos, who died in 1959. So these are contemporaneous composers more or less of the recent past or the present.

None of this music is in a High Modern zone so much as it is Melodic Modern Mainstream I suppose you could say. Yet too there is music of depth and concentration to be heard throughout. Nothing is meant to ingratiate so much as to experience in full. And if we open ourselves we get music excellently performed and lacking nothing. It is a tribute to the fullness of this musical experience to note that on the sixth listen I am hearing more, and still more, so that has to be a good thing.

Those not content to settle in with the same names and the same categories will find this a bracing run through lesser-known music. It is not inferior, no,  just not what we generally know. So now we can. Know. That's good! Recommended. Congrats to Anderegg and Ribeiro for a beautiful performance! And thanks to the composers, too, of course.
Posted by Grego Applegate Edwards at 8:11 AM