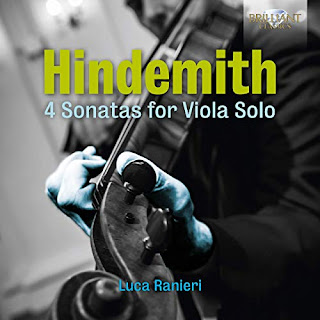 In the course of following my classical music muse, I have found there are certain composers I tend to welcome consistently into my hearing zone like a familiar friend who is up to something new (though perhaps not having lived on this earth for quite some time, even centuries by now). Others I might be happy to hear more of, but do not always know what exactly I might come to think of it all as a whole. Then there are those for whom I can always be convinced about, but for now I have not made up my mind. And finally of course the unknown artists I am just discovering.

Paul Hindemith (1895-1963) belongs in my mind to the first category. He was principally a viola player as a musical artist (though he played other instruments well, too).  So we might expect what he wrote for the viola was potentially something special, something he well might play in public himself. That is certainly true of the four works that appear on the CD at hand today, on the album Complete Sonatas for Viola Solo (Brilliant 95413). We hear all four solo viola works played with dedication and I might say nearly self-effacing devotion by Luca Ranieri.

Hindemith turned to solo string works I would assert as one of those who had in mind how singular were the Bach works for solo violin and solo cello. Do not forget that Bach's unaccompanied works were entering the concert repertoire during Hindemith's lifetime, after years of being relegated to what the string players viewed as pedagogical studies of great value but not seriously considered "concert music." That all changed in the last century  Fellow composers Max Reger and Bela Bartok, to name a few of his roughly contemporary colleagues, also devoted some attention to the unaccompanied world of solo stringed instruments. Both wrote notable examples still being performed today. For Hindemith this sort of "Extreme Chamber" milieu was an important realm that to him expressed something timeless yet too something very Classical-Modern.

On this CD we linger awhile with all four works, the "Sonata Op. 31, No. 4," the "Sonata 1937," the "Sonata Op. 11 No. 5," and the "Sonata Op. 25 No. 1."  All are of course "serious" fare in ways that marked Hindemith as much or more than any contemporary composer of his time. This was viola music for the classical sake of it, ever expressive in a somewhat stoic and even slightly severe manner. There was a very powerful thrust forward, with an aim not to realize beauty per se but, as Nielsen  asserted for his own music, to gain a kind of characteristic note-upon-and-after-note eloquence. Hindemith composed with a certain rigor no less central than those who in earlier times applied their own visions of note weaving in contrapuntal practice.

In the later '60s and early '70s when I first started listening to Hindemith there was a rigidly defined stylistic set of camps that existed between those that might favor Hindemith and those that were enthusiastic partisans of Webern and those that followed in his direct wake, the Serialist Dodecaphonic folks typified by the Darmstadt School. From the retrospective illumination of the present, when you listen to these rather fully abstract works you hear of course that Hindemith was constructive of his musical sequences in a more seminally tonal-structural world than Darmstadt yet his music and the Darmstadt High Modernists both favored an absolute musical-abstract stance that the experience of was and is not as far apart as one then imagined in the heyday of such controversies. In that way the largest, most general aesthetic aims of the Neo-Classicists and the High Modernists did in important ways converge. In contrast one might assert that these camps (in their earlier stages anyway) seemingly diverged more sharply than not from the Cage-and-followers US contingent.

When I say above that Luca Ranieri is nearly self-effacing in his performance of these works, I do not mean to suggest that his playing is not ultra-schooled and precise, very musically profound even. I only mean that his devotion to making the music sound as it was intended does not result in the sort of overtly performative showmanship one might possibly find in solo string realizations that call attention to the interpretive mannerisms of the artist. There is none of that to speak of here, yet in the end it is a pretty brilliant reading we experience of the music.

And in the end we are able to immerse ourselves in every turn of phrase on this program. We get the full Hindemith prescription undiluted and exactingly spelled out.

With the very low Brilliant retail price we can have this music for a song. I very much recommend that you spring for this one. It is Hindemith the way he saw himself, undoubtedly. And that is a very good thing!
Posted by Grego Applegate Edwards at 12:59 PM