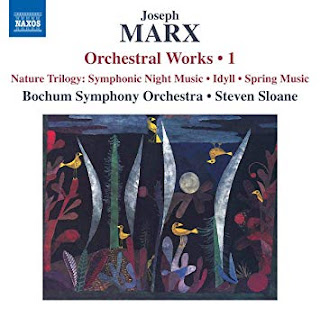 If you have slogged with delight through a great deal of Wagner, been piqued and satiated with Mahler's Symphonies and Song Cycles, sat by the speakers and/or sat in concert halls for long whiles while Richard Strauss wove for you his tone poem narratives, and bathed thoroughly in the musical-natural seas of Debussy, perhaps then you might explore the orchestral music of Austrian composer Joseph Marx (1882-1964). Most specifically is today's reference point and the only one I have experience thus far. We have his inaugural volume on the ever-exploratory Naxos label, Orchestral Works 1 (Naxos 8.573831).

I came to this program with no previous exposure to his music. According to the liners he was "one of the leading figures of Austrian musical culture during his lifetime." And, as we readily hear and the liners attest, his music was rather old fashioned, not at all a part of the Modernist world, the revolution in style that both Austria and the Classical Planet experienced increasingly beginning in his younger years and rather completely by his death. The liners also tell us that at that point his presence on concert programs and recordings all but vanished. Until now.

We get a chance to evaluate his music today, thanks to this series. I see the second volume has come out as I write these lines. All I can talk about though of course is what I am hearing on Volume 1. We are given the chance to examine and consider a three-work Natur-Trilogie he wrote in 1922 and 1925. The dates place it all squarely in a time when of course Strauss and Debussy were alive, productive and considered quite important to the times, though of course Schoenberg, Hindemith and a number of others were actively moving beyond such things.

And the above in the end is of no matter other than as a situating factor, an historical context. Each work in the Trilogy is lengthy in itself, lasting from 15 to 25 minutes. The three tone-poems interlock thematically as addressing the world of nature, which the overall title makes clear. The first work is a "Symphonic Night Music," the second, a "Concertino on the Pastoral Fourth," and the third is titled "Spring Music."

All three have a rhapsodic gush that makes them less Impressionistic and more Romantic than is typical of Debussy, say. The music seems to straddle both worlds, the strings often swelling Romantically while the winds and horns are more the pictorially Impressionistic as a rule.

As a product of Marx in his 40s we can assume they are the mature works of a composer already well on the way to realizing a lifework. I cannot say after many listens that Marx clearly delineates himself with some extraordinary originality. Yet he is quite a craftsman, that I do hear.

I am not sufficiently stirred by this music to seek out further volumes, though I am happy to hear this one. If you specialize in the Austrian scene and want to flesh it out he is an important listen. I am not entirely sure that this is essential to the rest of us. It is well performed and well written. But it is not going to change your musical world, I suspect. If you like the idea of an Impressionistic Strauss, then you might find this worthwhile. Otherwise you may not find it awe inspiring. But if you can preview it, go ahead. You might love it. I do not. I like it though.

Posted by Grego Applegate Edwards at 9:45 AM