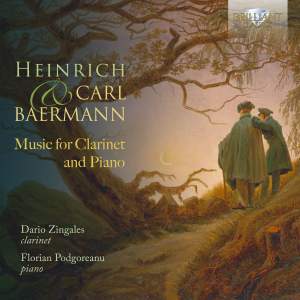 If you are feeling cocky and you think you know all the composers, guess again. There is a never ending stream of composers old and new being performed and often enough released in recorded form these days. And good for that, certainly. What about Heinrich Baermann (1784-1847) and Carl Baermann (1810-1885)? Their music I have been experiencing on a new Brilliant Records release, covering their Music for Clarinet and Piano (Brilliant 95785).

So what of them? The liner notes spell it out. The father and son should be considered "among the the greatest clarinet players of all time." Their compositions reflect an attention to the burgeoning voice of the instrument in late Classical-early Romantic times. They were widely admired in their day, and in many ways gave Europe (and eventually the world) the foundational inspiration for the clarinet virtuosity that we now take for granted.

The selection of compositions by Heinrich and Carl contained in this program are mostly first recordings. Dario Zingales realizes the clarinet parts with a beautiful ringing tone and agility. Florion Podoreanu aquits himself quite nicely as an able and effective partner on the piano.

The first thing on the first listen that one will recognize is Carl's clarinet-piano transcriptions of 6 Lieder of Schubert's. You will recognize many or most of them and it is quite nice to hear them as realized for the clarinet.

The music as a whole has the kind of lyrical clarity and soaring qualities of clarinet parts you may have heard in works by Schubert and Weber, Mozart and in time Brahms. It is not an accident since the influence was undoubtedly a two-way affair as the time and place allowed.

There are moments as well of pronounced clarinet virtuosity, understandably. The six additional, original works are a boon to anyone who loves the clarinet and seeks to trace the origins of the modern style. The music is in no way tangential or ephemeral. And it all gives pleasure in the well executed performances we are given by Zingales and Podgoreanu.

This is a bargain as a Brilliant release and if you are a clarinet enthusiast, you are sure to respond to it all.

Posted by Grego Applegate Edwards at 7:38 AM

Email ThisBlogThis!Share to TwitterShare to FacebookShare to Pinterest
Labels: clarinet aces of the 19th century remembered via their compositions, heinrich and carl baermann music for clarinet and piano dario zingales and florian podgoreanu classical-modern review