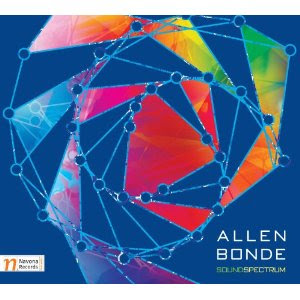 I know nothing about Allen Bonde. His album of compositions, Sound Spectrum (Navona 5862), is my first exposure to his music. It's a set covering some of his song output plus piano and orchestral works. Stylistically Bonde generally works within certain established parameters. The songs are within a kind of tonal approach reaching from the more conservative aspects of Ives through to some of those who followed in his wake. I found myself slightly at odds with the Elizabethan lyrics he has made good use of and the vocal style of the soprano, apparently his wife. They are stylistically polyglot, in that she is singing with a full near-operatic flourish and/or cabaret style that I find difficult to get past to the music itself (which seems better suited to a simpler vernacular vocal style) and its relation to the lyrics.

The "Fantasia for Piano and Orchestra" is another story. It is well crafted and the piano solo part has a kind of vivacity that appeals. His piano writing in the songs and the solo piano pieces show a side of his music that I find to be well wrought and engaging. The post-romantic through modernity stylistic spectrum gets attention and shows his musicality in the best light.

It's his "Symphony No. 1" in two movements that I find I especially like. It is a goodly modernistic excursion into ambiguously tonal territory, sometimes with a kind of mysterioso cast but with contrasting bold strokes in wind, brass and strings.

All-in-all Bonde shows himself to good advantage on Sound Spectrum. The orchestral and piano works are worth hearing. The songs I have mixed feelings about. I wish him well.
Posted by Grego Applegate Edwards at 4:20 AM