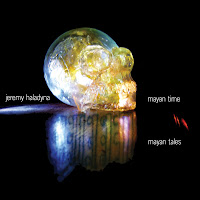 Things Mayan have been on people's minds since the story came out that the end of the world was predicted for this year according to their calender. Of course one might say they overshot the mark since Mayan Civilization in its classic Empire phase ended some time ago. However there are people who are susceptible to thoughts of the end, and so it gets talked about. I do not know enough about it to speak further, nor is it my place here to do so.

Nonetheless no doubt there is much to know about what the Mayans believed, what their cosmic world was like. Composer Jeremy Haladyna has immersed himself in this and continues to create music based on what he has learned, which he calls The Mayan Cycle. The second installation of said cycle is to be had on the new CD Mayan Time, Mayan Tales (Innova 818) and I've been listening to it with interest.

The press sheet tells me that the music contained here is fomulated according to "Mayan notions of time reborn as scales. And atop the scales, tales...." The time alotted to me to address music before seeking renumerative compensation precludes my immersing self and reader in the intricacies of all of this. I will leave that for the listener with time to do so.

There are seven sections to this part of the cycle. Each has a distinct ambiance, subject and instrumentation. I've listened all along without recourse to the programmatic information that the composer provides. There is much to be heard of note, meaning attached or no.

The first three movements have to do with the "Princess of the 9 Cave," and feature electronics and four-hand marimba. Movement four is for solo piano. Movement five, "The Crystal Skull of Lubaantun" is an electronic soundscape. The sixth, "Jaguar Queen" is scored for amplified soprano, singing in Yucatec Mayan from a traditional text, accompanied by piano and two percussionists. It sounds a little George Crumb-like. The soprano eventually strikes up a refrain similar to "Santa Lucia" and the marimba players pick up on that towards the end. The seventh movement has some dramatic music for organ and oboe, a sonorously striking combination.

The final movement, "Xtaj," is for amplified piano with effects, including apparently the overlaying of metallic objects over the strings of part of the piano for a richer percussive bite. There again I hear a Crumb influence in the use of space and reverberant semi-prepared piano. There is something more to it, however, that is Haladyna-esque. The phrasing can be denser, the rhythmic aspect more compact and actively turbulent.

Aside from the programmatic elements, this is a suite of widely diverging musical combinations and sounds. It is post-something (post-modern?) (or is it post-pre-modern?). At any rate Haladyna's musical personality comes into play as an eclectic but adventurous soul who, while getting at the heart of his Mayan explorations, gives us a wide-ranging, pleasingly sonorous set of musical vignettes charged with Haladyna's own brand of Mayan-ness.
Posted by Grego Applegate Edwards at 4:49 AM