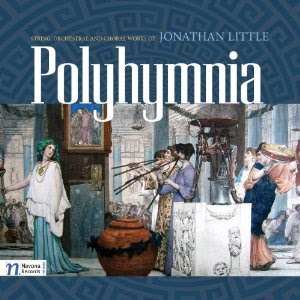 In composer Jonathan Little we have a voice. His music is tonal and filled with color. There are ostinatos and repetitions to be had now and again, but there is a forward momentum that at times combines with mystical suspensions that remind a little of Arvo Part and John Tavener (the present-day English composer, not the early music John Taverner); other times there's a folk element latent in the music that I suppose you could put in the lineage of Vaughan Williams. "Polyhymnia" and "Sacred Prelude" for string orchestra are examples of the former; the orchestral opus "Terpsichore" of the latter. The choral "Kyrie" has an early music element with a sonic modernism.

These four works and the short "Fanfare" can be heard on the recent album devoted to his music, Polyhymnia (Navona 5867). The performances are decent for the most part, the music dynamic and dramatic.

It's a composer who is young enough that we can expect to see further development. This collection of works shows that he has much promise and potential. As it is the music puts one in a place worth being.
Posted by Grego Applegate Edwards at 9:12 AM