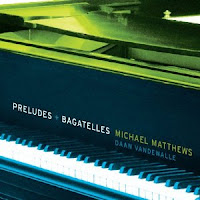 Back when almost every home had a piano and it was fashionable for young ladies (and young men sometimes) to get some accomplishment on the instrument, the repertoire for solo piano included pieces that the middling to well-grounded amateur could play in the home without too much trouble. Music publishing catered to such clientele and a popular, not too hard piece could sell well.

Times have changed, of course. The Victrola, radio, television and all the rest slowly ate into the general piano ownership/playership situation. Far fewer homes have them these days and subsequently far fewer amateurs are out there to play the music. A composer of solo piano works, especially those in a modern mode, does not rely upon sheet music sales for the most part and often composes the music for a more professional player and a changed playing situation.

So when I received composer Michael Matthews' Preludes and Bagatelles (Ravello 7819) solo piano CD in the mail, I knew that normally the recorded medium is the principal source of dissemination for such music, and appreciated all the more the act of composing such music in today's world.

As it turns out Michael Matthews has written some very evocative works. Daan Vandewalle performs the 21 brief works with a poetic charm. There are six of Matthews' Bagatelles, 14 Preludes and a Postlude. It's music of an expanded tonality, at times demanding a good amount of technique but above all a sense of creative rubato and a keen, intuitive ear for the overall musical trajectory of each work. There are passages that have a turbulent passion to them and those more relatively placid and introspective. They flow together well and leave an impression of a composer who has absorbed the solo piano tradition of the late romantics, impressionists and early modernists to come up with his own synthetic, personal series of musical utterances. Here is a composer of talent.

If you love the modern solo piano repertoire Preludes & Bagatelles will be a most welcome addition. I have no doubt I will return to this one many times in the years to come.
Posted by Grego Applegate Edwards at 4:38 AM