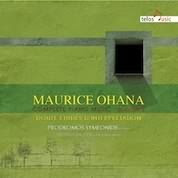 Maurice Ohana (1913-1992) studied with Alfredo Casella and made France his home base for most of his career. Though he is one of the lesser-known European composers of his century he most certainly deserves recognition. And there is evidence that he is beginning to get it.

A careful listen to the recent Complete Piano Music, Volume 2 (Telos 091) demonstrates this in fine fashion. It consists of a major solo piano set from 1982-85, the "Douze Etudes d'Interpretation," played by Prodromos Symeonidis.

This is sublime, complexly modern piano music with a certain trace of the searching mystical quality of Olivier Messiaen, especially in the irregular rhythms and some of the voicings. Promodos Symeonidis plays the 12 etudes with assurance, a sense of phrasing that brings out the musical contrasts well, and a poetic bearing. He is joined by percussionist Friedemann Werzlau for the last two.

It is music that needs your attentive ear for at least several hearings before the logic of the musical architecture and the expressive expansiveness of his pan-tonal/expanded tonal language becomes familiar and comprehensible. You are rewarded in the end with masterful work that is played with concentrated, concentric inspiration by Maestro Symeonidis. Beautiful!
Posted by Grego Applegate Edwards at 4:27 AM