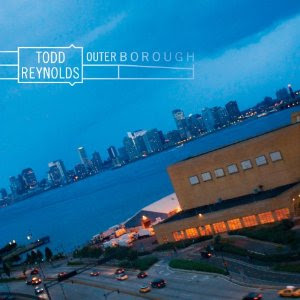 The thought expressed in Friday's review, that we currently enjoy a period of experimentation and innovation in contemporary concert music, continues on today with new music by Todd Reynolds, as heard on his recent 2-CD set Outerborough (Innova 741).

In this case we have as on Friday's Ethel recording the incorporation of rock and world music into a quasi-post-minimalist modern concert stance, but also a bit of electronica, what sounds like improvisation and, perhaps most importantly, live electronics.

The advent of the laptop computer and live electronics software like Ableton Live has opened up avenues of expression that the virtuoso violinist and music thinker/composer Todd Reynolds has capitalized on.

The CD set covers a wide terrain. CD I centers around Todd's own inventions and compositions. He plays violin, of course, but also viola, electric guitar, electric bass, and kick drum, and vocalizes as well. It's cushioned and forward by a live electro-acoustic environment that creates multiple effects and allows Todd to build chamber and quasi-orchestral densities of voices, partly by loop-building means, partly I assume by multiple tracking. The results are fascinating--moving, very musical short works that travel along with rhythmic-dynamic momentum and yet have a kind of transcendent lyricism thanks to Todd Reynolds's beautiful violin playing and fertile invention. The disk closes with "Icy Sleeves of Green Version 2.0," his memorable recomposition and improvisation around the beautiful old standby "Greensleeves."

Disk Twe realizes performances of compositions by Todd plus an illustrious gathering: Phil Kline, Michael Gordon, Paul de Jong, Michael Lowenstern, David T. Little, Nick Zammuto, Ken Thomson, Paula Matthusen, and David Lang. These are pieces where Todd gets involved in collaborative efforts with the composers, both on the strictly compositional level and in terms of production and added instruments, depending on the piece at hand. The music here too engages but often in ways that show the varying intentions and musical goals of the collaborators and understandably is not as unified in overall thrust. Nevertheless there is much to explore and much of it is very good. All of it is thought-provoking and exceptional, each in its own way.

I hear that Todd Performed at the indie rock festival SWSX in Austin this year. That's of course an indication of how the music should and does appeal to those outside the strictly classical claque, as well it deserves.

The album is an important one--very accessible yet very new. It's something any musical listener should appreciate. Bravo.