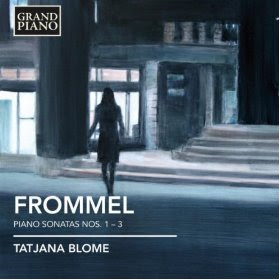 If one listens to music with a sense of discovery and adventure for years, one sooner or later comes across musicians and composers who for whatever reason are not well-known to the general music-loving world, yet repay your listening attention with worthwhile fare.

Such a person is composer Gerhard Frommel (1906-1984), most specifically in a new recording of his Piano Sonatas Nos. 1-3, performed by Tatjana Blome (Grand Piano 606).

Part of the reason may well be that he did not follow the avant garde tendencies of his era. His music does not veer toward atonality, there are no 12-tone rows to be found, serialism is not a factor. But one does not feel a lack of any sort when listening. The piano sonatas on the disk at hand are well put-together, inventive examples of idiomatic modern piano music that abound in thematic material of an attractive sort, pleasing developmenal passage work and a memorable quality in general.

His music is not anti-modern. I hear elements of Stravinsky's rhythmic drive and melodic singularity, a bit of the whimsy of Satie, sometimes a bit of the abstract modulatory harmonic quality of Hindemith, impressionistic elements. . . this is not the music of a reactionary, nor is it a hodgepodge or pastiche. Frommel's sonatas have a maturity of voice and sense of eventfulness that tempt me to call out the name as a discovery, a neglected voice, someone whose reputation needs reviving. Alas for now all I have to go on are these three very charming sonatas, played with sympathy and sensitivity by Ms. Blome.

Regardless of what the rest of his music may be like, surely the Frommel of this recording will find a welcome among those who love the music of the 20th century and do not mind going off the traveled road to find something. That this is. Recommended.

Posted by Grego Applegate Edwards at 4:23 AM