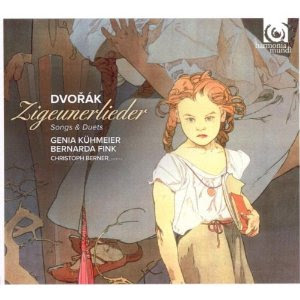 Anton Dvorak. Nearly everyone learns to pronounce (or mispronounce) his name in connection to his "New World Symphony." That is, in the States. I have a friend who was at one time a cashier for Sam Goody's, a retail NY Area record chain who at the time were full-line oriented. One of the questions they asked him in the interview was, "Who wrote the 'New World Symphony'?" Presumably a vacant stare, the answer "Beethoven" or "DI-voRACK" might have cost him a job, but he knew.

Of course Dvorak did a great deal more in the way of good music: numerous other symphonies, string quartets, solo piano works, etc. Then there are his lieder. They aren't as well known but are quite nice. Harmonia Mundi is releasing this month a selection of Zigeunerlieder, Songs & Duets (Harmonia Mundi 90281). Soprano Genia Kühmeier holds forth on the "Ziguenerlieder" (Gypsy Songs); mezzo-soprano Bernarda Fink puts her personal stamp on the "Biblical Songs;" both perform the "Moravian Duets." Christoph Berner provides sensitive accompaniment on piano throughout.

The Duets were well received when introduced and helped Dvorak get early recognition. Kühmeier and Fink sing them with great charm and spirit and they are quite worthy of our appreciation. The Gypsy and Biblical songs are somewhat more straightforwardly romantic in compositional execution, but do have much appeal. In the hands of the performers they come alive.

The disk is a must for anyone who wants to explore Dvorak in some depth. The performances most certainly leave nothing to be desired. They are excellent. To look into ordering, copy and past the following URL into your browser: http://www.amazon.com/Dvorak-Zigeunerlieder-Songs-Genia-Kuhmeier/dp/B006OW80YQ/ref=tsm_1_tp_un_it