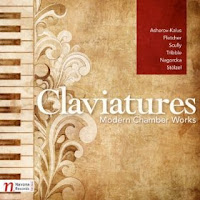 Claviatures (Navona 5864), as the title suggests, centers around the pianoforte as a common element in a series of chamber works. There is a sampling of three short works for solo piano by Ron Nagorcka; there are works for violin and piano by Jim Tribble and James Scully; a tripartite suite for flute and piano by William A. Fletcher; a work for clarinet, viola and piano by Ayala Asherov-Kalus; and finally a piece for violin, cello and piano by Ingrid Stolzel.

These are works of an attractive sort. Some are unabashedly tonal and lyrical, like Fletcher's "Three Lines (After Roethke)." Some have a bit of modernist grit, as with Scully's "Bouncing About." None are in the avant camp, though Ron Nagorcka comes close. All are well played by a varying cast of instrumentalists. The most evocative and pleasing of all to me is Ingrid Stolzel's "The Road is All," which has a kind of haunting feeling of lyrical reflection and suspension in time and memory.

In the end you have a series of works that go well together, seek to break no new boundaries but have an unassuming freshness about them. Good listening.
Posted by Grego Applegate Edwards at 4:16 AM