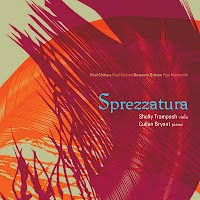 Sprezzatura as defined in music has to do with a combination of expressiveness and freedom of tempo. Sprezzatura (Ravello 7818) is also the title of a recent album by Sally Tramposh (viola) and Cullan Bryant (piano) of a selection of modern works (for viola and piano). The album contains world premiere recordings of Paul Chihara's "Sonata for Viola and Piano" and Paul Siskind's "Etwas fur Bratsche (etwas rasche!)". Filling out the program are Britten's "Lachrymae" and Hindemith's "Sonata for Viola and Piano".

The title of the album seems apt, as Shelly Tramposh's solo style is, somewhat like the late Joseph Szigeti on violin, concerned a bit more with expressiveness than beauty. So she turns out to be well suited to the Hindemith, for example, which is more dramatic and stirring than lyrical and sweet. The same could be said for the Britten. The Chihara and the Siskind are perforce new to us in recorded form, but Tramposh and Bryant bring out the bittersweet qualities of the former and the chromatic dash of the latter in good ways.

Cullan Bryant sounds equally expressive throughout at the pianoforte. In tandem the two make a worthy interpretive statement on each work. I've heard the Hindemith played somewhat more heroically, but the Tramposh-Bryant team define it more distinctly as a work in the expressionist-modern camp, where one might say it belongs, and which makes for a nice contrast to some of the other readings on disk that I am familiar with.

In the end we have recorded premieres of two works quite worthy of hearing and some distinctive interpretive takes on the Hindemith and the Britten. The Chihara premiere alone would make it worth hearing. But of course there is considerably more here as well. And there is indeed much sprezzatura to be had in these works as performed.
Posted by Grego Applegate Edwards at 4:48 AM