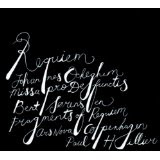 Paul Hillier has earned a world-wide reputation as a conductor of early choral works. He also has earned that reputation with new music that partakes of aspects of early music. So when he and the Ars Nova Copenhagen set about performing a Requiem (DaCapo 6.220571) that combined Johannes Ockeghem's (c. 1410-97) "Missa pro defunctis" and Bent Sorensen's (b. 1958) "Fragments of Requiem" I knew that if anybody would make this combination work, it would be Hillier.

And work it does, most emphatically so. Both composers follow the contrapuntal choral style associated with Ockeghem (and of course it was a natural idiom for Ockeghem himself!) and so there is a seamless juxtaposition and interleaving of the movements associated with the Requiem Mass. Bent Sorensen interjects dissonances, extensions and structural anomalies into the counterpoint for his movements, subtly, so that the already ethereal beauty of the music is given an additional expressive dimension; the harmonic implications of the lines are expanded while the modern ear is satisfied.

It's a very captivating performance and a moving experience. Ockeghem's mastery, Sorensen's masterful extension of the style and the sheer beauty of the Ars Nova Copenhagen's collective voices make for an almost painfully ravishing result.

It is an eerie juxtaposition and a sonic cornucopia of sensuous brilliance. I kid you not. Highly recommended.

Posted by Grego Applegate Edwards at 4:23 AM