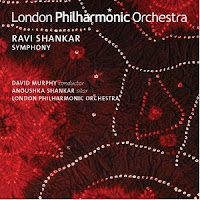 Ravi Shankar has excelled throughout his career in combining Indian and Western forms. His movie soundtracks over the years show an increasing mastery of writing for east-west combinations of instruments in ways that allow his creative muse to flourish.

Ravi Shankar's Symphony (LPO 0060) premiered in 2010 and in many ways forms a logical outcome consistent with his many years working with a very personal approach to so-called fusion.

The recording has arrived, a very good one with the London Philharmonic Orchestra under David Murphy, Ravi's daughter Anoushka Shankar playing the solo sitar part.

It's a work of vibrancy and contrast. The role of the sitar is concerto-like, in that there is virtuosity on display and a prominent role in the thematic content of the symphony. Rhythm and melody, not surprisingly, show Pandit Shankar's lifetime immersion and triumphant facility working with the Indian classical idiom. In many ways the work has the feel of the compositional aspects of a Jugalbandi (duet) recital, with sitar and orchestra in a sense taking the two contrasting roles. This is a simplification, since the orchestra rarely acts in a monolithic way; there is a full orchestral palette in Shankar's vision. The compositional forms are much more complex and extended than might be the case with typical jugalbandi themes.

And of course the sitar part is much more actively Indo-classical than perhaps the orchestra, especially in the hands of a budding master like Anoushka Shankar. The scherzo and finale movements give her a particularly extended set of variations and a chance to display virtuoso brilliance.

On the other hand the orchestral writing shows a great deal of imaginative scoring and a most effective use of virtually all the resources available.

It is music that generates a great deal of excitement. The sure hand of the master does not falter, but rather takes the longer form, larger ensemble music he has created so effectively since the beginning of his career and does them one better. It is the music one creates after a long lifetime of immersion and selfless dedication.

A brilliant work! A crowning achievement for Ravi Shankar, Anoushka Shankar and the London Philharmonic. Bravo!

Posted by Grego Applegate Edwards at 4:35 AM