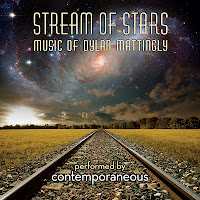 Listening to the music of Dylan Mattingly is a bracing experience. Stream of Stars (Innova 822), a new album devoted to his compositions, makes it clear that he is not following an orthodox minimalist mode of presentation. Imagine a typical chamber orchestral piece as conceived in the height of first-phase minimalism, say by Steve Reich or Philip Glass. There is a recurring pulse and a series of motifs repeating around it, gradually changing, altering, metamorphosing from the original set of repetitions. Some come in, extend, others drop out, and things proceed in a linear left-to-right manner for the most part.

Dylan Mattingly takes such motifs and breaks them into contrasting sections that appear and recur, combine and recombine, without a common tempo/pulse as a unifying factor. That's what you hear on the three extended works offered on this recording.

They are played with spirit and precision by the ensemble Contemporaneous.

The music has moments that drive forward with a sense of dynamic urgency. Other times, there is the flit of gentler motives in a state more or less of eventful repose.

Combine, say, an Irish jig, a set of passagework motifs from classical music, some lines out of contemporary tonal vernacular music, and a bit of the interlocking classical minimalist extended repetitions and variations. Fracture all of these elements into chunks along a sort of cubistic axis, with various contrasting tempo implications. Piece them together in interesting ways and you get something of what Dylan Mattingly's works sound like.

The album is well worth hearing. I am not sure at this point whether this tributary broken away from the main stream of orthodoxy is destined to become a river in its own right or remain a pleasantly diverse byway that does not carry that much traffic but gives a rest and an interesting excursion. Is it a model for wide imitation? Or something not as essential to the forward motion of the stream of stylistic development, but valid and stimulating in its own right? Time will tell. It sometimes has a symphonic-developmental feel that some minimalism does not, I will say that. Ultimately what matters is that this new music is original and worthwhile.

Posted by Grego Applegate Edwards at 4:42 AM