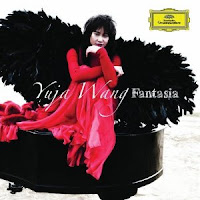 The modern day classical pianist does not appear to us in monolithic form. There are as many musical personalities on display now as ever, perhaps more so. Not everybody plays everything equally well. But some artists play certain chunks of the repertoire extraordinarily well.

Yuja Wang is such a case in point. I have not heard her previous release but based on her new Fantasia (Deutsche Grammophone) I am a believer. She tackles romantic and late romantic bravura virtuoso showpieces with an exceptional arsenal of technique and an orchestral-archetectonic grasp of the totality of a work that is nothing short of breathtaking.

Fantasia concentrates on miniatures, many of which would comfortably and admirably serve as encore numbers in a recital situation. They are sometimes lighthearted or vividly depictive, but in Yuja Wang's hands they become something more. Like the fairies in A Midsummer Night's Dream, she can take something more or less standard and just-so and transform it into something magical, charmed as it were.

Most if not all of the pieces will be familiar to the seasoned listener. Some are rearrangements of familiar orchestral or operatic movements: Scambati's adaptation of a melody from Gluck's Orpheo ed Euridice, Horowitz's "Variations on a Theme from Carmen," Liszt/Horowitz's adaptation of Danse Macabre, Staub's solo piano version of L'Apprenti sorcier. Then there are purely pianistic gems by Scriabin, Rachmaninoff, Chopin, Scarlatti and etc..

The very familiarity of much of the music serves to underscore the considerable technique and intepretative acumen of Ms. Wang. The multi-layered, orchestrally conceived passages become both plastic and brilliantly, poetically differentiated in Yuja Wang's hands.

This is show stopper brilliance, marvelous pianism. She is worthy of all praise garnered upon her. She is a pianist of the very upper echelon. Fantasia gives you 18 brief examples of why that is so. Excellent!