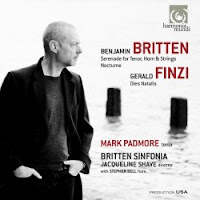 Benjamin Britten was one of the most evocative composers of the mid-to-later 20th century. When it was a matter of paralleling a text, be it lyric content or libretto, no one had quite his ability to paint a musical picture that resonated utterly with the meanings involved, but in such a way that it was unmistakably the auteur's music staves that were at hand.

The combination of the archaic quality of the natural horn harmonics (here we have Stephen Bell as soloist), the string orchestra's night-enfused score and the tenor's expressive vocal part give a poetic, atmospheric quality to the work. The performance of the Serenade given here most assuredly ranks up there with Britten's own verson. The night mood continues with the Nocturne, a less ponderous, more transient work.

Gerald Finzi's Dies Natalis ends the program on a more lyrical, naive note, as the text portrays the world through the eyes of a child. Finzi may not have been given his due as an English composer of stature, but he most certainly holds his own here and completes the mood of the more well-known Britten works.

Padmore is impeccable, the Britten Sinfonia detailed and expressive and the recording bright and well-staged in full sound dimension.

If you don't have these works you most certainly should if you follow the English 20th century orchestral-vocal masters. Those who have the Peter Pears-Benjamin Britten versions of the Britten works will find this recording a good version to contrast with them.