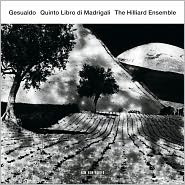 Gesualdo, Prince of Venosa (1566-1613). Thanks in part to Stravinsky's championing of the composer, those who revere or appreciate the expanded tonality of modernity recognize that Gesualdo's music was an early precursor of expressive dissonance. To be sure these were mostly contained in his Fifth and especially Sixth Books of Madrigals. And beyond such consideration we recognize that his overall vocal writing style was a brilliant highlight of his age.

The Hilliard Ensemble has just recorded the Fifth Book, Quinto Libro di Madrigali (ECM New Series) and a definitive, ravishing performance it is.

The sheer beauty of the music comes through admirably in the Hilliard Ensemble's capable vocalisms. It's scored for a sextet of soprano, two countertenors, two tenors and baritone. The sensuous diatonic parts and their emphasis on the upper ranges for moments of dramatic impact move from high moment to high moment, punctuated by what is customarily referred to the "shocking" dissonances. A modern audience used to romantic and contemporary harmony tends perhaps to find these punctuations not so much shocking as admirably expressive. As I first listened to this recording, forgetting for a moment the chronology, I thought to myself, "ah, yes, this is the earlier work, not the radically dissonant madrigals." I did not find myself shocked, I found myself engaged. The pure-toned clarity of the ensemble brings out the affective qualities of these madrigals with maximum expressive clout.

To be fair, the Sixth Book contains the more consistently radical dissonances. But what counts is the beauty of the music overall. That comes through clearly, passionately, and sonorously chime-like throughout the Hilliard's performance.

No one who wants to understand the mature Gesualdo should miss the Fifth and Sixth books. Here is perhaps the definitive recording of the Fifth. Another triumph for the Hilliards!

Posted by Grego Applegate Edwards at 4:39 AM