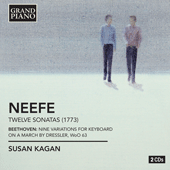 Keyboard music from the early classical period, in the right hands, has a certain simplicity and charm all its own. The style was first being hammered out for one thing, and so there is a freshness there. The budding world of amateur keyboardists needed music to play that was not too difficult or taxing.

Christian Gottlob Neefe's Twelve Sonatas (1773) fit the bill admirably, as you can hear on the new recording by Susan Kagan (Grand Piano GP615-16). They are very reasonably constructed, have a facile kind of emotionally cheerful nature typical of the age, and give the listener a little afternoon sun no matter what the weather. Most music-lovers will recognize Neefe as Beethoven's first principal music tutor.

Fittingly the 2-CD set also includes Beethoven's first published composition, the Nine Variations for Keyboard on a March by Ernst Christoph Dressler, WoO63. Showing the influence of Neefe's tutelage, it captures Beethoven's first, understandably simplistic handling of the variations form without giving one much intimation that a towering giant was about to shoot into the sky and change the course of classical music for good and all.

Similarly those looking for Neefe to have within his music the spark or kernel of a nascent romanticism will look in vain, at least in the sonatas performed here. These are very much in the mainstream of the simplified classical keyboard style. They are not in any significant way inferior to typical work of the time (though they do not match Mozart or Haydn for inventive brilliance), nor are they written in some white-hot fit of inspiration, or at any rate do not sound so.

Both sets of works are nicely and matter-of-factly played by Susan Kagan. If not exactly earth-shattering, it is nevertheless a most pleasant listen.