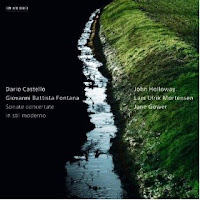 It turns out there is a wealth of early baroque composers who produced music worth hearing today. Until the early music re-renaissance that begin in the '60s we did not have the chance to experience the works of many of them. Now of course we do, in versions consistent with the period style.

Violinist John Holloway has been making a number of recordings devoted to some of the lesser-known masters. His latest, Sonate concertate in stil moderno (ECM New Series B0016622-02) presents sensitive, vibrant readings of six sonatas by Dario Castello (1590-1658) and seven by Giovanni Battista Fontana (1571-1630). Half are for violin and continuo, the latter handled nicely by Lars Ulrik Mortensen on harpsichord. The other half add the renaissance version of the bassoon, called the dulcian, handled effectively by Jane Gower.

These are well crafted, melodically rich works that bring out a virtuoso violin brilliance that John Holloway handles with dash. The sonatas that include Jane Gower's dulcian give us two uniquely colored instruments engaged in jaunty pyrotechniques and moving expressions. The sound of the dulcian in Ms. Gower's hands is full ranged, sonorous and fleet, forming a rather perfectly tantalizing counterfoil to John Holloway's brightly burnished baroque passagework.

In the end you get glowing small-group performances of compositions that have the alternating sweetness and fire of the best chamber music of this period.

Those who revel in early baroque chamber music offerings that recreate the sound and performance practices faithfully, and those seeking something rather brilliant and off the beaten path will get plenty to appreciate here. Recommended.

Posted by Grego Applegate Edwards at 4:36 AM