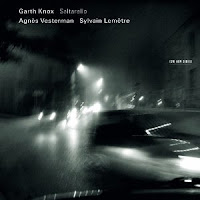 When artists combine early and new music in creative ways, my interest perks up. That is what is happening in Garth Knox's album Saltarello (ECM New Series B0016623-02).

Garth Knox was the violist for the Arditti Quartet before he embarked on a solo career. His latest album features him on viola, viola d'amore and fiddle, along with Agnes Vesterman, cello, and Sylvain Lemetre on percussion for stretches of the program. Otherwise it is just Garth playing solo with a pre- and post-romantic string sound and technique, sometimes with archaic folk-early music double stops, always with multi-stylistic imagination.

The dance numbers feature Knox and percussion or the entire trio (after all the album is called Saltarello) and are given a lovely reading. The breadth of music covered in between is a testament to Knox's idea of the new in the old and the old in the new. All form a continuum so that nothing seems out of place. The performances are in turns authentic and exploratory, but always the timbre of the string playing and expressiveness are the threads that guide the listener through the many twists and turns of the program.

I found it all enormously invigorating and quite a listen. Garth Knox has mastered his take on the early and the present-day with his own musical acumen and personality. A beautiful recital from beginning to end!

Posted by Grego Applegate Edwards at 4:30 AM