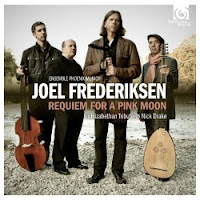 The best songs of the Elizabethan age often had a melancholy, poetic quality. Think of John Dowland. The later sixties-early seventies spawned a number of gifted singer-songwriters who expressed a similar regret-in-the-face-of-life-experience. Think of Paul Simon, Tim Buckley--and Nick Drake, who died in 1974 at age 26 but not before recording a number of beautiful albums of his music. He was only hailed and recognized later on. I only discovered his music last year myself.

This kind of synergy and synchronicity between two eras vastly separated in time has been the inspiration for Joel Frederiksen and Ensemble Phoenix's new recording Requiem for a Pink Moon (Harmonia Mundi 902111).

It's a most unusual album. Lute, bass lute (or are the bass notes of the lute given a presence throughout much of the performance?), viola da gamba and vocalists converge upon some of the best of Nick Drake's songs and rethink them in Elizabethan style. This is something that could end up badly. All depends on a thorough transformation of the music to the old style, and that the songs themselves lend themselves to this treatment.

Joel Frederiksen succeeds where others might have faltered. The lute and ensemble arrangements are quite wonderful, the vocals straightforward and plaintive, there are some parallel Elizabethan song counterparts and the whole thing is loosely presented in the form of a Requiem, including contemporary Elizabethan settings from the traditional Requiem Mass.

It is a sterling example of a hybrid fusion that works by changing your perception of the singer-songwriter '70s as well as the past into which it is thrown. That's because it is not thrown willy-nilly, but recreated with understanding of the songs themselves and the style of early music to be rethought with new material. And it works because Nick Drake's songs are exceptionally beautiful.

It's one of the albums of the decade or at least the year for me, but the category would have to be something like "unexpected music"! Listen to this one, please.