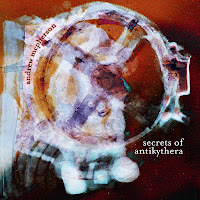 The later modern concert world has perhaps less of the mysterious as a theme than might have been the case in the romantic-early-mid-modern era. Scriabin, Ives, Messiaen and Crumb come to mind.

But then there is Andrew McPherson. His Secrets of Antikythera (Innova 842) is an excellent return to the mysterious. With a nicely preliminary solo viola piece, "Kinematic," setting the stage, he jumps into a first short piece and then a long multi-sectioned one (the title work) for magnetic resonator piano (the first work also includes cello). It's a conventional piano miked, the signal threaded through a magnetic resonator electronic device. If you know Charles Dodge's Earth's Magnetic Field, an electronic music work out in the later '60s, you know the sound. It is very rich and mystically mellow. Add the conventional piano sound to that and it gets very interesting.

The piano part is quite involved, and often suitably resonant in itself. The ghosts of Scriabin and Messiaen and spirit of Crumb haunt the music a bit but there is very strong individuality to be heard and marvelous piano writing.

It's rather glorious music, very much its own secret mood and musically profound. If you are as I am a lover of the modern piano as grand narrator (Messaien) of a mystery story, this will get you very happy. McPherson boosts the piano repertoire with a major thrust forward on this one. And Ryan MacEvoy McCullough gives a fabulous performance. Highly recommended!