Sonograms: A Compilation of Modern Music from Eastern Europe and Germany 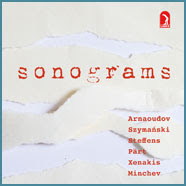 ...and speaking of mysticism, as we did yesterday, here is a modern/postmodern offering that has some of that as well.

Specifically, we have a compilation produced by Heiner Stadler for his Labor Records of some singular modern music--out on LP years ago (the '70s) and now reissued with additional material. Sonograms (Labor 7090) has an unusual mix of compositions for recorders, solo piano, and one for string quartet. The composers are, especially for the early '70s when the LP version was first issued, a mixture of the pretty obscure to the well-known, Xenakis, Part, Gheorghi Arnaoudov, Pawel Szymanski, Walter Steffens, and Georgi Minchev, the latter with a five part solo piano work for which the album is named ("Sonograms").

Other than Walter Steffens's turbulent string quartet "Ecstacy," the music alternatingly features Angela Tosheva on piano and Benedikta Bonitz on recorder(s). Both show themselves in a very good light.

There is mysticism (Arvo Part) and all kinds of modernist, pomo, and avant-old-new strains.

There are some real finds here, such as Szymanski's highly singular "Two Studies" for piano, for example, which has a sound all its own. And Arvo Part's "Arbos" in a recorder ensemble version is irresistible.

If you want a real change from the ordinary, Sonograms provides it with a very rangy selection of music for today. I find the whole thing very captivating.