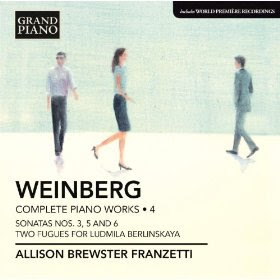 If you aren't familiar with the solo piano music of Mieczylaw Weinberg, you may well be as happy as I am with what I am hearing. That is, if you like classical-modern Eastern European music in general. The Complete Piano Works 4 (Grand Piano 611) features Allison Brewster Franzetti in fine performances of some major mature works: the Piano Sonatas Nos. 3, 5, and 6, and a world premiere recording of his brief opus "Two Fugues for Ludmilla Berlinskaya."

No. 3 was written in 1946 after, having escaped Nazi persecution, he was well settled in Moscow. Nos. 5 and 6 are later works, from 1956 and 1960, respectively. They constitute Weinberg at his very best. The Fugues date from 1983.

These are idiosyncratic Weinberg works, original, a bit melancholy, filled with great bursts of melodic counterpoint, motor impulse rhythms, the spice of modern harmonies and the grand sweep of greatness.

They are beautiful works, played with feeling and sensitivity by Ms. Franzetti. Highly recommended.