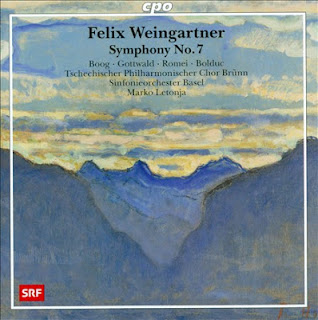 Felix Weingartner (1863-1942) has been known to us until now primarily as a great conductor, especially of the Vienna Philharmonic and the Vienna Hofoper, where he succeeded Mahler. The recordings that came out on LP eventually have been cherished possessions, for Weingartner conducted with a very balanced and clear vision, a more "golden mean" sort of conductor than a romantic per se.

It turns out he was a prolific composer as well. Marko Letonja and the Sinfonieorchester Basel have made a new recording of his Symphony No. 7 (CPO 777 103-2) which is an ambitious work for full orchestra, choir and soloists. Perhaps this will mark a turning point in his international reputation. In any event it is a work of great orchestrational command, thematic depth and dramatic impact.

Without sounding like them, Weingartner in his 7th shows some of the largeness of Bruckner and Mahler. It is a work of soaring rhapsody, cosmic mystery and fully fleshed-out grandeur.

The performance is quite impressive, passionate and sympathetic, so we get a very fair hearing. I have no idea what the rest of his music sounds like, but Symphony No. 7 is a winner. Lovers of the symphonic tradition from Beethoven through Mahler will no doubt revel in this recording. Whether Weingartner is here to stay time can only be the judge.