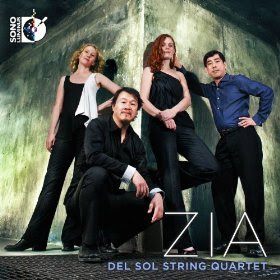 String quartets with folk roots, that nonetheless still have a modern aura about them? We get that quite nicely with Del Sol String Quartet's ZIA (Sono Luminous 92164). It's an anthology of five composers, five works, five ways of nourishing roots in the modern world by adapting them into the string quartet idiom. It's a good idea, backed up with works and performances that bring the idea to light with a bright sort of flame. The title is in fact the name of an Indian tribe and the back cover shows an illustration of their sacred sun symbol.

So we have Gabriela Lena Frank's six movement Leyendas: An Andean Walkabout (2001), the very familiar Lou Harrison in a fairly late work, from 1978-79, String Quartet Set, which deals in Middle-Eastern influences for the most part, Jose Evangelista's Spanish Garland: 12 Folk Melodies from Spain (1993), the Persian inspired Nayshaboorak (Calligraphy No. 6) (2005-6) by Reza Vali, and Elena Kats-Chernin's Uzbekestanian rooted Fast Blue Village 2 (2007).

The works fit together well, thanks to their emphasis on melodic characteristics and on the Del Sol Quartet's very direct, no-nonsense interpretations/performances.

It's a beautiful set, a change of pace for the modernist ear that can still welcome and appreciate new ways of making the music alive again. It is also quite a feather in Del Sol's cap. They sound marvelous.