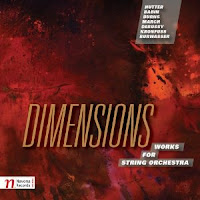 The reason of course that string quartets adapted to string orchestra sound a certain way, sometimes not as well as music originally conceived for the larger ensemble, is that the sonic universe is different. One ideally writes for the string orchestra differently than for the string quartet. The presence of contrabasses and the masses of strings makes something sound ravishing that might not sound as well for the quartet.

Take for example Barber's well-loved Adagio. It has a sensuousness that the orchestra brings to it that you do not get (in the same way) for quartet.

The new collection Dimensions: Works for String Orchestra (Navona 5895) capitalizes on that sonarity in a series of eight modern-era works, mostly by relatively less-known composers.

The exception is Debussy's "Maid with the Flaxen Hair," which sounds quite lovely here. Otherwise there are works by Gregory Hutter, Louis Babin, Reynard Burns, Andrew March, Rudy Konfuss, and Daniel Burwasser, played by a variety of orchestras and conductors, all sounding well.

This is predominantly modern tonal territory, impressionist and neo-impressionist, or in other words sumptuous but not bloated, showing a sensuousness without lengthiness, and the presence of musical daylight.

I mentioned earlier Barber's Adagio, and there is a fair amount of music here that has a similar kind of hushed sprawl, long sustained lines, things that string orchestras sound especially good at realizing. There are some pieces/movements that get lively as well, so there is a good pace to the disk.

It is a very pleasant listen. It is music of substance that will nevertheless appeal to a large audience if they get a chance to hear it. Nicely done!